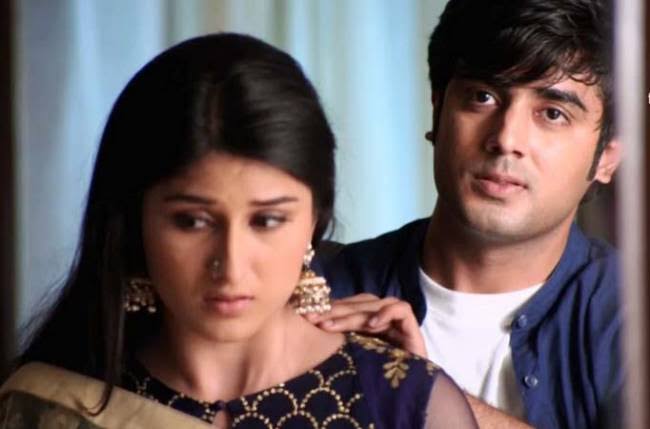 Deception 30 April 2020: On Deception Thursday 30 April 2020, The Episode starts with Naren throwing Pan down on floor and says he is Naren and not Praveen, and dislikes Pan.

Pooja comes there and asks what happened? Bela tells that she forgot Praveen is not here, and acts to cries. Pooja says Naren has become irritated. Bela hugs her. Pooja says she will search somework for him. Bela thinks she will pull out Praveen’s heart.

In the night, Naren gets up and goes to Bela’s room. Bela gets up and says you are here at this time. Naren says not Naren, call me Praveen. He sits on her bed and asks her to feed him pan. Bela feeds him pan. It turns out to be Naren’s horrible dream. He recalls Chandrika asking him to keep Pooja always with him, saying she is your biggest shield. He sleeps close to Pooja.

Next day, Pooja tells Naren that they will keep this room as that of their old room. She slips. Naren holds her. She teases him. Pooja asks him to get ready. Naren teases her saying if he runs away with someone else. Pooja says nobody can handle albela like her. She asks him why he is getting irritated with Bela. Naren says she don’t understand that I am Naren, not Praveen. Pooja says it is not easy for a woman to lose her husband immediately next day after marriage. Naren asks why you are over protective about her. Pooja says your life is because of her. Naren asks her to tell her not to be around him. Pooja says I will tell her.

Naren asks her to be with him all the time. Pooja laughs. Naren says if this heart runs away with someone then don’t blame me. Pooja asks why he is scared and says I have solution for your problem. She sings song and records it. She hugs him. Naren smiles. Pooja asks Naren if he can give job to Bela in office. Naren refuses and says she does strange things. He asks for the handkerchief.

Bela tells that she will take Naren’s life to fulfill her revenge. She recalls her childhood with her father. She writes naren on the wood by sharpening it with an object. Pooja comes there. Naren is in his car. Bela shows him pan. Naren is surprised.

Pooja praising Bela’s talents. Bela says my dad made these dolls in my childhood and gave me, I always keep this with me. Pooja says you will make such dolls, I will talk to Naren, join our handicraft department. Bela says who will like to see a widow around, I won’t go anywhere, I don’t want to become a burden. Pooja says I understand your problem, I have a solution. Naren gets down the car and sees Bela at the betel store. He eats the betel leaf just like Praveen. He enjoys the betels and eats more. He gets shocked seeing the vendor. He runs and spits the betel leaf. He thinks why am I behaving strange. He messages Pooja and asks her will she come on a date with him. He messages her to wear red saree, it suits her. Pooja asks Bela to take any saree she likes. Bela says but colorful saree….

Pooja says life doesn’t stop when someone leaves, Praveen will be hurt seeing you like this, accept colors for his sake. Supriya takes Pooja for a talk. She asks what are you doing. Pooja says whatever happened, it was not Bela’s mistake. Rahul greets everyone and asks did meeting not start till now, there is no heir except me, so shall we start the meeting. Naren says definitely Rahul, but can meeting start without company’s MD. Harish smiles. Naren asks him to excuse them. Harish says so sorry Rahul, your place is waiting. They all see the presentation. Rahul leaves from there. A song plays in the video. Nain ladjaiyve……plays… Naren relaxes hearing the song which Praveen used to sing. Harish asks how did you like the presentation.

Naren talks like Praveen and says it was a great one, what was that song. He sits over the table and sings. Harish asks Naren is this any joke. Naren says no, its just a talk. He sees her phone and comes back to senses. He looks around and gets down the table. He leaves from there. Pooja and Bela come to office. She asks Bela to sit and goes to see Naren. Naren doesn’t see her and worriedly goes. Bela comes to Naren’s cabin and sees his pic. Naren throws the files and thinks of his behavior. He sees Bela in red saree and thinks she is Pooja. He says you did good to come Pooja. He holds her hand and says I fought with you and even then you have worn red dress, thanks. Bela holds his hand. He sings the same song. Pooja comes there and gets shocked. She calls out Naren. He turns to her and gets shocked. He then sees Bela’s face.

Bela recalls checking Pooja’s phone and reading Naren’s message. She takes the red saree. Pooja asks her to keep that saree. Naren asks Pooja why did she give her saree to Bela. He throws things and asks Bela to go home to change saree. Pooja stops him from scolding Bela. He says I told you not to get her to office. Pooja says I got Bela here to keep her engaged. Naren says ask her not to come in front of me. He scolds Bela. He goes. Pooja asks Bela what’s all this.

Harsha talking to Supriya about the saree. Supriya asks her to leave the matter. Pooja asks Bela why didn’t she stop Naren and says you knew that he was Naren. Bela falls down on her feet and says she couldn’t say anything when Naren come closer to her, and before she could say anything you came here. She says I will not do anything else, can’t reply to Praveen’s heart. Pooja says you have saved my husband and I can’t forget your favors, and also I can’t forget that Naren is my husband and you should also not forget. She says we shall search work for you.

Harsha and Neelima warn Supriya against Bela. Harsha says how can Pooja give her gangaur saree to Bela, if the latter asks for Naren then? Neelima says Pooja shall think about Surbhi.

Pooja takes Bela to show the factory. Bela breaks the toy car and throws it. Naren recalls hugging Bela while she is touching his hand. Bela comes there and asks him if he is fine, calls him Praveen. Naren says I am Naren and not Praveen. Bela holds his hand and says you wouldn’t have come near me, if you had understand. She tries to get closer to him and says I am in your mind else pooja would have been here. Naren asks her to stay away from him and he sees Harish and Danish there. Bela takes iron nails in the handkerchief and says she will give the pain. Harish asks Naren what happened o him and why did he talked in Bhojpuri language. Danish tries to cover up his act. Harish says it was good Bhojpuri touch for Bihar’s project. Naren is tensed.

Neelima tells Supriya that Bela made poor people’s food. Harsha says Surbhi will not eat it. Dada ji asks her to stop it. Rahul taunts Naren. Pooja comes. Harsha asks Neelima to get food cooked for Surbhi. Pooja says she has cooked simple food for surbhi. Harsha taunts her and asks her to be careful. Surbhi says Pooja said that she made food for me. Rahul asks her to go to room. Bela says I will go to my room and is angry. Pooja tries to stop her. Naren stops her and says Bela didn’t do a big favor on you so that you forget everything. Bela uses hammer and nails down Naren’s name on the big box. She swears to to kill him in the night and keep his dead body inside.

Harish tells Pooja that she did right by giving work to bela in handicraft dept. Rahul says Naren will see her now and taunts him.

Pooja says it seems you have forgotten about your doings. Rahul asks her to say clearly. Pooja says your sight is crossed in the house. Rahul says truth will not change that Bhai and you don’t belong to us. Naren says enough and asks him to talk to him directly. Rahul says your wife don’t leave neta giri. Supriya says she won’t let Bela stay in the house. Bela thinks she won’t let Naren’s heart beat and compromises with the switch box, thinks Naren will dies once he touches it. Naren asks Pooja about the tool box and goes to his old room. Surbhi wakes up hearing the sound. Naren says I am Naren and asks her to rest. Rahul takes pic in which Naren keeps his hand on her shoulder asking her to rest. Surbhi says its ok. Naren takes the tool box and leaves.

Related Topics:Zee world
Up Next