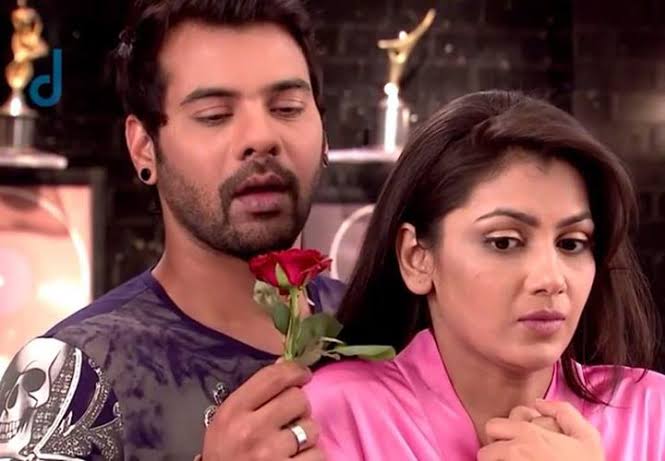 Daadi gets Sarla’s phone and thanks her for her gifts. She informs Sarla about Abhi and Pragya’s honey trip to Shimla and says she wanted to send them to Switzerland, but Abhi did not agree. She will convince them to go to Switzerland from Shimila. Purbi gets happy hearing Pragya’s honeymoon trip to Shimila and Switzerland. Bulbul thinks what will Abhi do to Pragya in this trip. She sees Pragya standing near door and asks her to come in, asks why is she looking dull. Pragya says she is having headache. Daadi says she will massage her head as she does to Abhi.

Daadi is on the dinner table with her whole family except Abhi. She sees Raj working on dinner table and asks him to eat first. Pragya says she will bring food. Daadi asks her to sit and says servants will bring them. Taiji thinks daadi makes her work a lot, but is asking Pratgya to relax. Once food comes, Taiji asks Pragya to taste food. Daadi says Pragya prepared whole food today and says she does not know as she does not go to kitchen. Pragya serves paneer to Raj’s daughter Babli. Abhi comes, sees his family having dinner and asks if it is someone’s birthday. Daadi asks him to join. Abhi looks at Pragya and says he ate outside. Daadi asks Pragya to mend Abhi’s ways. Abhi comes near Pragya and asks if she will mend her. Daadi asks him to stop frightening Pragya. Abhi says he is just joking. Pragya gets up after dinner. Taiji says her bahu that this new girl is so lucky to enjoy lavishness after coming from street side.

Abhi comes to his room and sees Pragya’s clothes and gifts allover. He angrily asks why did she do that. Pragya says Daadi changed it. He sees god’s idol and says daadi must not have kep it. Pragya says she kept it and she does not need anyone’s permission to keep god’s idol. Abhi asks her where is her god, why did not he give her a good husband and gave him instead. She asks her to go and file a case on god that he made her married such a horrible husband and says there is no god. He says Aaliya got betrayed by Purab and he consoled her, not god; when he was hungry in childhood, he fed his himself, not god; etc, etc. He asks Pragya to tell her god to make him a common man from rockstar. Pragya asks him not to be too egoistic and to fear time, if not god. She says if time changes, nobody will help except god. Abhi asks where was her god when he was very poor, etc. They both start a verbal argument and Pragya goes from there. Abhi thinks she must have won daadi’s heart with these religious talks.

Bulbul tensely thinks she does not want any confusion in Pragya’s life and everything happened because of her, she will finish all this. Purab comes and says he is glad that she agreed to meet hhim and says he will clear her confusion. The girl that she was with him was Aaliya and he agreed to marry Aaliya for friendship’s sake, but he loves only Bulbul. He says how can Pragya and Abhi marry so early, there is something going on. Bulbul says Abhi married Pragya thinking her as Bulbul, to trouble her,now she is in deep trouble.

Sarla comes to Pragya’s house and asks her to keep warm clothes and cough syrup. Abhi jokes even if she drinks cough syrup. Sarla says she gets cold even in mumbai. Abhi says she will get my fever now. Daadi asks Sarla not to get tense and says if she gets tensed, she can call air hostess. Abhi says he will drop her from plane. Pragya hears that and says parachute will be there. Sarla gifts Abhi a sweater and says she made it long back and it is very warm. Abhi accepts her gift and says we should leave now as we may miss a flight.

<p>Purab says it is not possible as Abhi is rockstar and his taste is different, for sure Aaliya must have brainwashed him. Bulbul says whoever has done, my sister is in trouble. Purab says he will explain Abhi he cannot ruin someone’s sister’s life for his sister. Bulbul asks him not to tell Abhi as he will trouble Pragya more. Purab asks who told her all this. She says she heard Abhi saying all this to Pragya and says she has a way out of it. Purab asks what is it. She asks him to marry Aaliya.

Abhi and Pragya are in a car. He angrily asks her what is this. Pragya says it is sweater. Abhi says it is so hard, he does not even like to wipe his car with it. Pragya starts crying saying mom made it with her hand. Abhi says mumbai did not get its monsoon, but she started her crying. He asks driver to play music loudly, but then asks him to slow down after seeing PRagya crying continuously. He says her if she thinks he will apologize her, he will not. He says he did not know sweater is made by her mom, he thought she made it. He then apologizes her for his mistake. Allah wariyan… song plays in the background.

Bulbul asking Purab to marry Aaliya. Purab asks what will happen to their relationship then. Bulbul says she does not love him now and says why did he not inform her about his engagement to Aaliya and why did he betray Abhi, because of his mistake, her sister is suffering. She says before it is too late, he should marry Aaliya and if Pragya gets any problem, she will not forgive him.

Pragya and Aaliya reach a hotel. Aaliya asks why have they come here when they had to reach airport. Abhi says if she is very eager to sit in flight. He goes to reception and takes rooom keys. Pragya asks him repeatedly why did he bring her here, he does not listen to her and takes her to a room and says welcome to Shimla. Pragya asks what rubbish is he talking. Abhi says he is not rubbishing, it is her Simla, she wanted to enjoy her honeymoon, it is her honeymoon here, he will go to his girlfriend now. He says he told her this trip will be her worst trip and asks her to pray god to strengthen her to stay here for 4 days. Pragya says she will be happy staying alone for 4 days without him and says he would have booked a small hotel room instead. Abhi says he will remember her choice and asks her not to go out of room, else she will repent.

Tanu calls Abhi and asks if he dropped behanji at hotel. Abhi says yes and now he is going to a concert as he does not want to miss earning money. He says he asks her to meet him in the evening to spend some quality time. Tanu’s friends praise her for spoiling Abhi’s honeymoon and warns her from Pragya saying when she can manipulate Purab, she can manipulate anyone.

Pragya sees painting of couple kissing near Eiffel tower and reminisces Bulbul telling she is excited to hear her enjoying near Eiffel tower, etc. She gets Sarla’s call who asks her if she reached airport. Pragya says yes and says cabin crew is asking to keep phone.

Abhi is busy preparing for his concert. His sponsors ask him to wear their dress with their logo. Abhi says he will, but needs alteration before that and asks his secretary to alter it showing Sarla’s gifted sweater by mistake. Secretary says it will not fit him. Abhi says he made a mistake and brought someone else’s bag. Secretary says it is okay, people make mistake in love. Abhi asks her to shut up and says he will bring his bag from hotel.

Pragya opens window and sees rain outside. Pyar hai ya saza…. song plays in the backround. She cries remembering Abhi telling he will make her life a hell. She hears door knocking sound, opens it and sees waiter holding her tea. Waiter gets in and drops tea on her by mistake. He apologizes her. She says it is ok. She opens suitcase and sees it is Abhi’s suitcase instead. She thinks of wearing Abhi’s clothes till she washes her clothes and dries them.

Tanu comes to Abhi’s concert venue and gets angry hearing people talking that Abhi went back to his wife as he loves her a lot.

Abhi comes to hotel room and calls Pragya, but she does not pick it. He calls room service who opens the door. He calls Pragya/Chashmish to wake up, but she is asleep listening to music. He takes her earphone, hears song and says she hears very boring songs. Pragya opens her eyes and sees Abhi. Abhi says he needs his clothes which she is wearing. Pragya says her clothes are wet and she cannot remove his clothes. He gets Tanu’s call, picks it but forgets to cut it. Tanu hears him asking Pragya to remove her clothes and she resisting but agreeing to remove it. She cuts call and calls him again, asks where is he. Abhi says he is in his friend’s house and is removing his frien’ds clothes, his clothes…. and then asks her to wait for him until he comes back.

Pragya says she cannot remove clothes. Abhi says he will give his clothes to change, removes his t-shirt and gives it to her. He changes clothes, sees Pragya wearing his clothes and says she is looking like Jr. Abhi and he would have used her as his duplicate if he would have found her before. He says he is going for his honeymoon and asks her to enjoy, but not to call her boyfriend, else he will ruin them both. He says she is looking rocking and goes from there. He smells PRagya’s perfume on his clothes and says it is smelling awful. Pragya says same smelling his perfume.