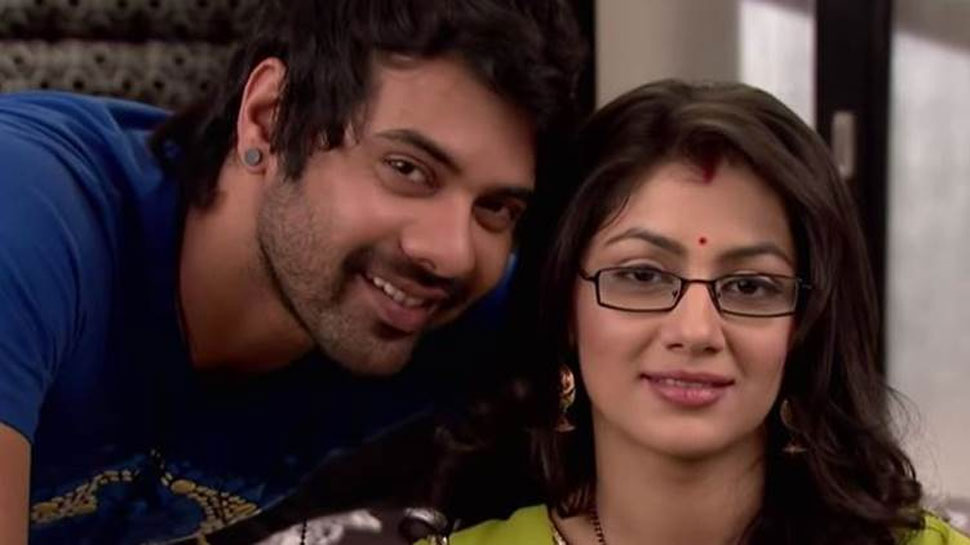 On Twist of Fate Tuesday 12th May 2020, In the scene, Rragya was found dreaming about Abhi misbehaving with Sarla. Sarla sees her tensed and asks if she is fine.

Pragya looks at daadi happily talking to her cousins and Abhi talking to someone and relaxes. Abhi comes and says Sarla that he wants to talk to her someone. Pragya asks Sarla to have food first and then speak to Abhi. Sarla asks Abhi what he wants to say. Abhi says he does not love Pragya and says he is asking her to drink, but she is not drinking. She says Pragya it is her last chance, else he will tell Sarla. Pragya gulps the whole glass and says it is a juice. Abhi asks what was she thinking then and asks Sarla if she can thinking asking her daughter to drink. She says never. Pragya asks if he was drinking juice all the while. He says he does not drink alcohol in home parties.

He says she must be thinking I am very bad, but I am not that bad. He then goes and meets Tanu. Tanu says she does not know him. Abhi asks her not to joke with him. She says she is not joking and says he made a supermodel a thief and says cousin daadis think her as thief, good media did not come here. She says if daadi forces him to have kids, then he will have kids with Pragya. She asks when was the last time they spent quality time together. Aaliya says Tanu is telling right and asks him to go and drop Tanu home and spend some quailty time with her. Daadi comes and says it is raining and he should drop her home. Abhi says ok thinking she is talking about Tanu. Daadi says he should drop his in-laws home. Abhi gets petrified hearing that.

Mamaji says Sarla and family he will drop them home. Sarla says his home is far away and not to worry about them. Abhi comes and says he will drop them. Sarla says it is ok. He says then he will ask his driver to drop them. They agree and leave from there. Pragya asks Abhi why was he making drama. Abhi says he is angry on her as Tanu is angry on him as ring was found in her bag instead of Pragya. Pragya asks if it was preplanned. He says yes, but Tanu became a scapegoat instead of her.

Daadi enjoys car ride and says she is enjoying it. She takes out scotch bottle. Sarla says why did she take it from son-in-law. Daadi says it is 20,000 rs bottle. They hear another car’s horning sound and gets irritated. Pragya sees Abhi and Tanu in that car and tries to engage Sarla and others. Dadi says she is dreaming about Abhi and talking wierdly. Abhi idenitifes his car and sees PRagya and family in it. He calls Pragya and scolds her for taking her family via that route. They both start a verbal argument. Abhi gets annoyed.

Mitali sees her children fighting and asks them to stop fighting, but they continue fighting. Mitali thinks nobody listens to her. Kids then start questioning her about national bird, animal, etc., which she answers and then asks them to read it in book instead. They then ask what is their national food. She sees aaloo paratha in her hand and says aloo partha is our national food. Kids joke everyone eats aloo paratha, so she must be right. Raj hears that and asks her not to give wrong answers. Mitali gets annoyed and leaves from there blubbering.

Abhi jokes with Tanu that he will go back to Pragya. She gets jealous and asks him to leave now. He says she is jealous and says he will go then. She asks him not to take Pragya’s name, else she will drink his blood. He says chasmish already drank his blood. He then apologizes her for joking and says he can do anything for her. She says he did not drink in party for Sarla’s family sake and asks him to drink and prove he is love for her. Abhi says police will catch him. She insists. He says he will drink, but not to blame him if he loses his senses. She says ok and they both start drinking. Tanu throws beer can out and it hits Suresh who is coming behind in his scooter. Tanu asks Abhi what he does with Pragya at night. He says PRagya drinks her blood whole day and she sends her to balcony at night so that mosquitos drink her blood. He says she takes care of him though. Tanu says not much like her and tries to kiss her. Abhi rams his car into a man while kissing and says he will check what happend to the man. Tanu says media will catch us and asks him to leave. Suresh helps injured man and notes down car’s number but is shocked to see Abhi in that car.

Sarla and her family reach home with Pragya. Pragya says she will leave home now. Purbi jokes she want to go and meet jiju and to let her go. Daadi asks her to stop taunting Pragya. Sarla asks Bulbul why is she looking sad. Pragya asks her not to question her and says she was alrady taunted in the engagement. Sarla says she felt bad when Abhi misbheaved with her while checking her bag. She says Abhi loves his sister a lot, so he was upset a bit, says if they don’t fight, they cant love more. Sarla asks who was the girl who forced Abhi to check your bag and Abhi found ring her bag. She says she is Tanu, Aaliya’s friend. Sarla says she saw him in her marriage and every function.

Abhi asks Tanu to relax. Tanu says it was because of chashmish, she stared at us and did her magic.

Suresh brings street vendor whom Abhi injured to police station and asks him to tell everything. Man says a rich spoilt brat destroyed his cart and injured him. Inspector asks if he saw his face. He says he fell on the floor after the accident and did not see it. Sursh reminisces Abhi ramming the man and other incidents where he misbehaves with Pragya. He reminisces Abhi with Tanu always and says inspector he saw that man and gives car number. Inspector asks if he knows the culprit. Suresh says he is rockstar Abhi and this man would have died if he had not seen saved him. Inspector gets tensed hearing Abhi’s name and signals his constable to handle Suresh.

Aaliya and Purab are in Aaliya’s bedroom. She thanks him for the engagement and says she got it with great difficulty and tries to kiss him. Purab brushes her and gets up. She says what is wrong with him and says they are engaged. He says we are not yet married and leaves from there.

Suresh meets Pragya and Bulbul and says PRagya she does not have to worry now and he will get her justice. Bulbul asks him why did he come again. He says he will teach him a lesson and will not listen to Pragya also. PRagya thinks whom he is talking about.

Abhi checks punishment for drinking and driving and gets tensed. Pragya comes to her room, sees Abhi and asks when did he come. He hides his laptop. She asks what is he hiding. He says it is none of her business. She thinks he is watching porn and says sorry to disturb him. He shows laptop and says he is watching this. She removes her specs and reads it as drinking and driving. He asks when she can read from a distance without specs, then why does she wear it, says maybe to strengthen her magic and says he got her secret now. She asks what secret. Abhi changes his dress and comes back to his room. Pragya brings him coffee. He asks what is it. She says it is not alcohol and says it is coffee for him. She asks why does she do it. She says she does it for him and says if he falls ill, she will bring him hot water, he will then torture him, etc., etc. He stops her by holding his finger on her lips. Window opens and they both try to close it, but come close to each other, then get conscious and part ways. She tries to sleep on floor. He asks her to sleep on bed, else she will fall ill and will torture him, etc.

He then divides the bed into two and asks her to sleep on the other side of bed, else he will punch her. Pragya says he does not like to die. He asks what?? She says nothing, just sleep. They both sleep on their sides. Pragya asks him not to switch off light as she gets afraid in dark. He asks then what does she do in balcony. She says she looks at the hoarding. He says what is she who does magic and brings rain, takes light from hoarding, etc.

READ NEXT: Twist of Fate Wednesday update 13th May 2020