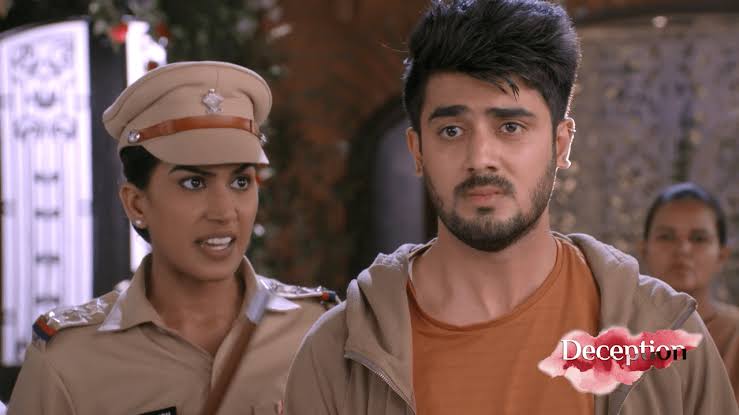 On Deception Tuesday 12th May 2020, In the scene, Pooja was telling Naren about her premonitions regarding Meghna. Naren says it is just your dream and asks her not to worry.

Pooja says her premonitions came true. Naren says you will save everyone. Dada ji welcomes Satish, Anuj and Rachel. Pooja thinks Meghna’s marriage will be happy one. Satish tells Dada ji that kanyadaan is the best where we get chance to do daughter’s daan. Dada ji says Harish is not ready to agree. Pooja looks on. Neelima and Harsha come from shopping. Pooja asks them to get ready and attend the function. Supriya also asks them. Dada ji says I want you to attend the function even if they don’t want, as he don’t want to see bride unhappy. Harsha says bride shall be happy, even if daughter and bahu are upset. They go to get ready. Pooja asks if Harish will come. Supriya goes to Harish and asks him to come for atleast her, to hold Meghna’s chunari. Harish agrees. Rahul and Naren bring Meghna holding her hand. Anuj throws flower petals on her way. Meghna sits.

Dada ji asks about Harish. Pooja says he will come in 10 mins. Supriya says we shall get chunari rasam done by Naren and Pooja. Dada ji says ok. Naren and Pooja hold chunari on Meghna’s head. It catches fire. Naren throws chunari on floor and sets off fire. Haldi bowl falls down. Supriya says it is inauspicious. Naren says it happened before the rasam so there is nothing inauspicious about it. Pooja asks Harsha to give chunari which she brought today. Harsha is upset and goes to bring chunari. Kunal’s parents talk that marriage will not happen. Mrs. Goenka says she will teach her a lesson for trapping her son. Mr. Goenka says ladies are ladies. Kunal says he will not drive the car. Mrs. Goenka says she will drive. Harsha gives banarasi dupatta. Pooja says yesterday Meghna said that she likes it. Kunal says even I came?

Kunal comes and says he also came. Mrs. Goenka says she will apply haldi and applies with brush like sticks. Meghna feels itching and scratches her hands and legs. Naren and Rahul argue that they will apply haldi to her first. Meghna calls Supriya and tells about itching. Harsha talks to Mayank’s pic and says everyone forgot you, Meghna will never be happy for making me cry. Meghna tells that she is feeling burning sensation. Naren asks Anuj to give water. He washes her feet and hands. Pooja wipes her hands. Supriya says what happened to her. Mrs. Goenka says Meghna must be delicate and says today’s girls don’t like haldi uptan. Kunal says there is something wrong in haldi. Mrs. Goenka gets tensed. Meghna says no rasam is fine since morning. Pooja says we shall apply her haldi which we got for Kunal. Surbhi brings haldi. Pooja and others apply haldi to Meghna. Dada ji asks Harish to be happy in the function. Harish says he will have only bad thing for Meghna and asks him to excuse himself.

Lady Inspector tells that there is again marriage in Vyas mansion and we are not needed, not possible. She says she will go to Vyas Mansion, as an extra security to welcome the baraatis. Meghna tells Pooja that she will get Mehendi applied with her hand. Pooja says ok. Designer shows gents’ outfits for marriage. Naren checks Sherwanis. Pooja is still applying mehendi to Meghna. She turns and see designer suits taken inside by the servants. She recalls seeing the Sherwani’s button in her premonition. She stops Manoj and checks Sherwani.

Pooja tells Naren that she told him that he will not wear black sherwani. She asks designer Kriti to make all blue sherwanis for everyone. Anuj tries to make Pooja understand. Pooja says nobody will wear black sherwani in Meghna’s marriage. Naren asks designer to go. Kunal’s mum applies lemon juice on Meghna’s mehendi and wipes Kunal’s K from her hand. Pooja checks her hand and writes K on it, praising her design. Neelima and Harsha excuses themselves. Supriya asks Harsha to invite Kanhaiya for meghna’s marriage. Harsha thinks she can’t pray for her and keeps card near in the inhouse temple. Mrs. Goenka asks her husband if he will see the marriage happening. Mr. Goenka says Meghna and Kunal’s relation will burn. He burns the wedding card. Pooja sees diya near the wedding card and changes its place. She thinks to visit the temple again.

Supriya tells that they shall take Meghna inside as Gauri puja is done. Pooja tells Supriya that she wants to go to temple. Harsha says it is inauspicious. Pooja says there is nothing inauspicious if we go to temple. Kusum asks Pooja not to argue. Supriya asks her to go later after marriage. Pooja agrees. Kunal takes out anklet from the box and thinks to meet Meghna using anklet as an excuse. He showers flower petals on her. Pooja asks him to go and tells that she has to set the mandap. She tells him that they didn’t get married in mandap, and says it would have been good if Meghna had done their ghatbandhan and they had married infront of all. Naren says lets do something typical. They are dressed as bride and groom. Meghna ties their ghatbandhan, while everyone showers flower petals on them. Ek tu hai plays….Naren and Pooja take rounds and he fills her maang with sindoor. They hug each other. Song plays…It turns out to be their imagination. Dada ji and Supriya come there. Pooja says Naren is teasing me. Someone comes and says Goenka family sent bridal dress etc.

Pooja goes to make Meghna ready. Mrs. and Mr. Goenka ask Kunal to get ready and wear turban. He asks them to go and get ready fast. He sends voice message to Meghna asking her to show her face to her. Meghna shows her hand pic and replies that it is inauspicious to see or meet before marriage. Pooja and Surbhi tease her. Mrs. And Mr. Goenka takes Kunal’s signatures on the papers saying Naren sent it. Kunal signs on it. Meghna tells Pooja that she didn’t think that she will marry in the family. She hopes Harish accepts her. Supriya says Harish attended all of your functions.

Pooja sees all men of the house in black sherwani and asks them to go and change the clothes. Anuj says how can all sherwanis be ready in one night. Pooja asks them to change. Dada ji says only good things will happen. Pooja asks Naren to come with her and says she will buy sherwanis from shopping mall. Naren says he has to go and attend business meeting in an hour. Pooja says baraat will come in 3 hours. Naren meets Meera on the way and she tells him that Vivan’s mother is alive. She gives gift for Meghna. Rahul and Surbhi have an argument. Pooja and Supriya are shocked to see the varmala garland broken. Pooja thinks bride’s vidaai shall happen happily.