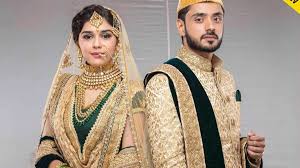 There is war in paradise in the Ahmad family especially between the two brothers, Kabir and Kashaan. Shabaaz continues to brainwash Kabir against Zara. READ FULL Zara’s Nikah October 2020 Teasers Below:

Zara’s Nikah Friday 2 October 2020
(Episode 97)
Rukhsar fails to reevaluate Zeenat and Ayesha. However, she recognises Kabir and Zara. Everyone is horrified to see Rukhsar attempting to walk on the ledge to get to Zara’s room. Rukhsar’s leg slips, but she safely lands on the mattress. Later, Zeenat announces that she is leaving the home along with Rukhsar.

Zara’s Nikah Saturday 3 October 2020
(Episode 98)
Zara and Kabir assert over changing the syllabus of this plank. Rukhsar tells Zara that Zara’s husband becomes her husband too and consequently, she would need a kiss from him. Zara informs Kabir that she has given the contract to print the novels to Faheem.

Zara’s Nikah Sunday 4 October 2020
(Episode 99)
Rukhsar breaks down a glass and inadvertently steps on it, thereby hurting herself. Zara and Kabir present their arguments in front of the Sharia Board. Zeenat scolds Amaan for flunking his exams. When Kabir says that he’ll change Amaan’s current school and acknowledge him in a Madrasa, Kashan disagrees.

Zara’s Nikah Tuesday 6 October 2020
(Episode 101)
The family members ignore and behave indifferent towards Zara. Zara comes to her home to ask Salma to talk to her in-laws. Shahbaz, to everybody’s surprise, apologises to Qazi and Salma on Kabir’s behalf.

Zara’s Nikah Wednesday 7 October 2020
(Episode 102)
Kabir and Kashan continue being uneasy in each other’s existence. Later, Rukhsar tells everyone that Kabir was in her room the entire night, shocking everyone. Zara locks herself up in her room, making Ayesha and Alina tensed.

Zara’s Nikah Thursday 8 October 2020
(Episode 103)
Rukhsar remembers that she was about to be engaged to Kabir. Kashan informs Shahbaz that Kabir has ruined his own relationship with his clients. An enraged Kashan gives Kabir a piece of his mind and says that the home runs on his money.

Zara’s Nikah Friday 9 October 2020
(Episode 104)
Ayesha, Alina and Zeenat prepare variuos dishes to observe the patch up between the brothers. Kabir informs them that the jeweller has came to get jewelry, shocking Shahbaz. Zara tells them that she has called the jeweller. Why?

Zara’s Nikah Saturday 10 October 2020
(Episode 105)
Zara asks Shahbaz to lease a space of their outhouse to her. Kabir asks that the male servants to shift their belongings to another house of his. Kabir calls a snake up catcher and asks him to grab the snakes at the outhouse. Kabir later declares that Rukhsar’s condition is now normal.

Zara’s Nikah Monday 12 October 2020
(Episode 107)
Kabir takes Zara with him on a drive. Shahbaz sees them wonders what Kabir is up to. Shahbaz brainwashes Kabir and tells him that visiting the jail was planned by Qazi and Zara. Later, Zara inquires Kabir if he regrets making her beg.

Zara’s Nikah Tuesday 13 October 2020
(Episode 108)
Ayesha arrives to Zara’s space with Kabir’s clothes and puts them on fire, as suggested by Kabir. She says that she is doing it to punish Kabir, however, Zara sees through the strategy. Shahbaz gets a call from Mr. Thomas, threatening him to pay his money back. A thrilled Kabir informs Shahbaz that he has supplied blankets to the poor, with the’zakat’ cash.

Zara’s Nikah Wednesday 14 October 2020
(Episode 109)
Zara sees a chance and goes through Shahbaz’s file to see what he’s around. Kabir speaks at length about the way he is a staunch Muslim while Aazib calls it fanaticism. Shahbaz and Zara have a war of words. Zara smartly compels Kabir to accompany her to Tikona Maidan, leaving him speechless.

Zara’s Nikah Thursday 15 October 2020
(Episode 110)
Chandu kidnaps Zara and threatens for ransom. Kabir sells his car for INR 2.5 lakh to rescue Zara from the kidnappers. Shahbaaz reveals Kabir a fake movie, accusing Zara of staging her very own sanity. Zara is shocked to see the movie but promises Shahbaaz to defeat him soon.

Zara’s Nikah Friday 16 October 2020
(Episode 111)
Kabir promises to never see Zara’s face . Rukhsar learns about her being Kabir’s second spouse from Zara and needs to stay with her. Zara agrees, but puts forth a condition. Ayesha warns Zara that she is burning the bridge between her and Kabir by involving Rukhsar, who could be a threat to her later on when she regains her memory.

Zara’s Nikah Saturday 17 October 2020
>(Episode 112)
Kabir repents his actions towards Zara and finds a quick. Next, Zara is shocked to learn some startling news about Kabir! At the restaurant, Rukshsar slyly leaks, and Kabir and Zara are shocked to learn that Rukhsar is missing.

Zara’s Nikah Sunday 18 October 2020
(Episode 113)
Zeenat blames Zara for conspiring against Rukhsar. Kabir comes to Zara’s rescue and carries the whole blame upon himself. Kashan informs Shahbaaz about Azib not being interested in doing business with them. An instigated Rukhsar attempts to smack Zara, but Kabir holds her hand.

Zara’s Nikah Monday 19 October 2020
(Episode 114)
Everybody is stunned to visit Rukhsar, dressed as a bride, dancing her way into the glory while Rukhsar needs to remarry Kabir. Kabir apologises to Salma for his misconduct previously. At the party, Tabu insults Shahbaaz and hands him a cheque of INR 15 lakh as a token of aid.

Zara’s Nikah Tuesday 20 October 2020
(Episode 115)
Zara provides Tabu a befitting response, and a furious Tabu and Aazib storm out of this celebration. Shahbaz brainwashes Kabir to keep away from the world and not to bother about earning money. In the Sharia Board meeting, Zara presents her proposition that says that they need to lower the purchase price of their blankets and rather provide rations.