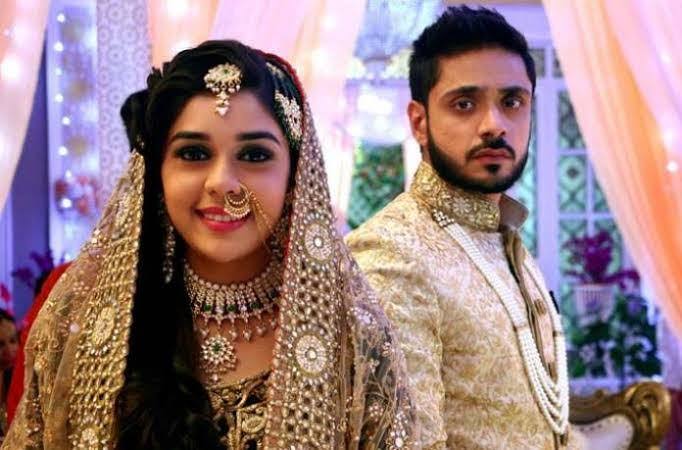 Miraj is sitting in his room, he recalls how Siraj was arrested, he recalls how Ruksaar agreed that she messaged from Zara’s fake profile, he says Ruksaar plotted and Siraj got hurt, now I will plot and three people will be hurt.

Kabir comes to his room and looks around for Zara. He feels dizzy and drinks juice which Miraj gave to him, he faints. Ruksaar comes to his room wearing a nightie. She opens its strings and hovers over Kabir, she caresses his face and opens his shirts buttons, she takes off his shirt.
Miraj comes to Kabir’s washroom from backside, he puts a silencer on his gun.
Ruksaar is molesting Kabir, Kabir holds her hand in dizziness. Zara opens her room door and shocked. She screams Ruksaar! Ruksaar looks up. Zara rushes to her and grabs her, she pushes her away from Kabir and says what were you doing? Ruksaar says Kabir called me here. Zara says stop saying rubbish, how dare you come near my Kabir? Ruksaar says Kabir is not yours, he is mine. Miraj opens washroom door and comes in Zara’s room, he points gun at them. Zara’s face is towards him.

Miraj comes to Zara’s room. Ruksaar has back to him, Miraj points gun at them, he shoots Zara, she screams. Ruksaar smirks. Zara falls on Ruksaar. Ruksaar whispers Kabir was mine and will remain mine. She throws Zara on bed beside Kabir and laughs evilly.

Kabir is still unconscious. Ruksaar says to Miraj you fulfilled my dream, when did you plan this? thank you and Siraj. Miraj points gun at her, she is shocked and confused. Miraj moves gun and points it at Kabir, he shoots Kabir in chest. Zara is breathing heavily and tries to hug Kabir. Ruksaar screams Kabir.. Kabir and Zara hold hands. Ruksaar grabs Miraj and says why did you kill my Kabir? it was not the plan then why? Miraj shows her gun and says this was your gift from Siraj. Ruksaar takes gun from him.

Miraj turns to leave, Ruksaar calls out to him and points gun at him and shoots but there is no bullet in the gun. Miraj shows her bullet in his hands and says I have this… this all turns out to be Miraj’s dream, he says my planning is right, I will do my trick and three people will die.

Zara is trying to call Kabir but his phone is switched off, she is at Salma’s house. She thinks to call Kabir here, she messages him to come to her parents’ house.

Kabir comes in his room with cold-drink Miraj gave him. He looks around for Zara and searches for his phone but cant find it. He tries to call Zara from landline but Miraj cuts landline wire. Kabir drink cold-drink and calls out for Alina. He comes ot lounge. Ruksaar and Miraj comes there. Miraj says Ruksaar wants to talk to you.

Kabir says where is Zara? Miraj says servant told me she went to her parent’s house. Kabir says I am trying to find my phone but dont know where I left it. Miraj recalls how he had taken his phone. Miraj asks him to talk from his phone, he calls Zara but Kabir says its engaged, whom she is talking to for such long time? Miraj says it must be some network, dont be worried, you talk to Ruksaar.

Kabir recalls how Miraj told him that Ruksaar is not happy with her wedding, Miraj leaves.Miraj comes to driver and pays him, he gives him some instructions.

Kabir says to Ruksaar that this is childishness, stop crying. Ruksaar weeps. Kabir gives her water. Miraj comes back and says I came to tell that dont worry about Zara, I have sent my drver to bring her back. Miraj keeps him busy, Ruksaar mixes some liquid in water meanwhile. Miraj asks Kabir how is Ruksaar? Kabir says I am making her explain, Miraj leaves. Ruksaar says to Kabir that I am sorry, I get emotional and you get worried because of me, you know why I did all this. Kabir says enough, I have told you to follow your surroundings, you cant always get what you want, accept fate. Ruksaar pours water for him which is spiked and says I am trying, dont worry, drink water. He says I dont want it, she asks him to drink it. Kabir takes water and drinks it. Ruksaar lustfully looks at him. Kabir coughs and feels dizzy, he tries to remain awake but faints.

Ruksaar gets ready in her revealing nightie, she puts on makeup and comes to Kabir’s room, he is still on bed unconscious. Ruksaar is about to close the door, she sees Miraj outside and gives him thumbs-up, he winks at her, she closes the door. Miraj tucks his gun and turns to leave but Zeenat stops him and asks who are you? tell me, why you are playing game with our house’s respect? he says what game are you talking about? Zeenat says you know which game I am talking about, the game which is about to start between Kabir and Ruksaar in that room, why you are destroying an innocent’s life? why dont you leave our lives? we dont need you. Miraj smirks and turns to leave.

Zeenat says you think I will let your game finish? you are wrong, I have called Zara, she must be coming here anytime soon and you wont be able to do anything. Miraj gets angry and is about to take out his gun but stops himself. He turns to her and says atleast I got to know that you are Ruksaar’s real sister, remain like this, goodbye, he leaves. Zeenat looks on.

Scene 2
Ruksaar approaches Kabir and opens her nighti flaps, she lies beside him and says I waited for this day for 6 years, to be with you, to touch you, to feel you and I got this moment, I fought with fate and got you, you are mine now, only mine, I will become a bride, I will marry you and will get Zara divorced.

Ruksaar hovers over Kabir, he caresses his body. Aa Zara kareeb se plays. Miraj is silently going to the back of room. Ruksaar clutches Kabir’s fingers and smiles at him. Miraj looks from their washroom and sees her romancing with unconscious Kabir. He takes out gun, puts silencer on.
Zara comes to Kabir’s house. Zeenat calls her and asks where she is? Zara says I have arrived. Zeenat asks her to go and meet Kabir, he is waiting for her. Zara enters lounge and says to Zeenat that I am going to meet Kabir. She leaves. Ruksaar leans down and is about to kiss Kabir, he caresses his face. Zara is approaching her room. Ruksaar hovers over him but Zara enters the room and is stunned to see her with Kabir. Ruksaar gets tensed. Miraj smirks. Zara rushes to Kabir and shoves Ruksaar away from him, Ruksaar says I.. Zara says shut up. Zara is checking on Kabir, she asks her what did she do with Kabir? Zara tries to wake him up, she checks his pulse and asks what happened to him? Zara sprinkles water over his face, he wakes up a little. Kabir murmurs Ruksaar what are you doing here?

Ruksaar sits beside him and tries to caress his face, Zara is stunned to see her and slaps her, she pushes her away from Kabir. Miraj sees it from washroom and puts his gun away. She asks her to move away from her bed, Ruksaar says Zara.. Zara says shut up, you have said enough, what were you trying to do? trying to snatch my right? trying to get my Kabir? Kabir says Zara Ruksaar was.. Zara rushes to him and says to Ruksaar that I told you to not enter my room and you came to my bed? you tried to tarnish his honor? I have had to bear a lot but not anymore. She drags Ruksaar from there. Ruksaar tries to stop her but Zara pulls her out of her room.

Scene 1
Zara drags Ruksaar out of her room, Ruksaar tries to stop her but Zara grabs her and pulls her to lounge, she throws her to table, Ruksaar falls down and glares at her.
Kabir tries to wake up, he is still dizzy and have headache.

Zeenat comes in lounge and rushes to Ruksaar, Zara glares at them. Zeenat puts dupatta on Ruksaar. All family members come there. Kabir comes there too. Ayesha asks what is all this? Zara says there was something indecent happening in my bedroom, on my bed with my husband, something that people call as molesting. Ruksaar says to Kabir that this was your fault too, you came closer to me, you looked at me with love. Kabir is stunned and buttons up his shirt.

Ruksaar says Kabir you know what you are to me, you know I can die in your love. Ayesha glares at Kabir, Kabir says it cant happen. zara says Ruksaar you are lying, I saw Kabir in state which shows who is lying, I will show your reality. zeenat says look at her condition, she doesnt have clothes to stand infront of men of house, its not about fault but its about honor of a girl who is an orphan, you can come with me to lock her if you think she will runaway, she takes Ruksaar from there.

Miraj comes to his room and says I didnt know how I could not see Zeenat before, if I met her before then I would have married her, she played a nice game.

Kabir says I dont undertand anything, Ayesha asks Kabir what did Ruksaar say? Zara says no Kabir you dont have to explain anything, the person who can agree to die instead of choosing divorce, that person cant do something like this, I trust you completely, Kabir smiles at her. Zeenat comes there and asks Kabir what happened in his bedroom? Ruksaar was found in a place in condition which she should have not been, if Ruksaar is at mistake then we will punish her but tell me Kabir how Ruksaar went to your room and was in bed with you? Kabir tells her how Miraj told him to talk to Ruksaar about her marriage, how he talked to Ruksaar.

Zeenat asks how Ruksaar came to his bed? Kabir says I drank water and then I slept. Zeenat says you slept after drinking water? Miraj comes there and says seems like this is a family talk, I will leave. Zeenat says you are a family member, I want to ask that you called Kabir here, what happened after that? Kabir says I couldnt find my phone, he asks Alina to find his phone. Miraj says Ruksaar was worried so I asked Kabir to talk to her, Kabir was finding Zara so I sent my driver to bring her back then when I cameback in house, I didnt find Ruksaar or Kabir, I went to my room, I dont know what happened after that. Kabir looks on.

Alina beings Kabir’s phone and says I found your phone on your bed, Kabir says but I couldnt find it before. Miraj recalls how he gave phone to Ruksaar and she had put it in Kabir’s bed. Zeenat takes Kabir’s phone and asks if she can check it, he nods. Zeenat checks it. Kabir says if phone was in my room then I would have found it.