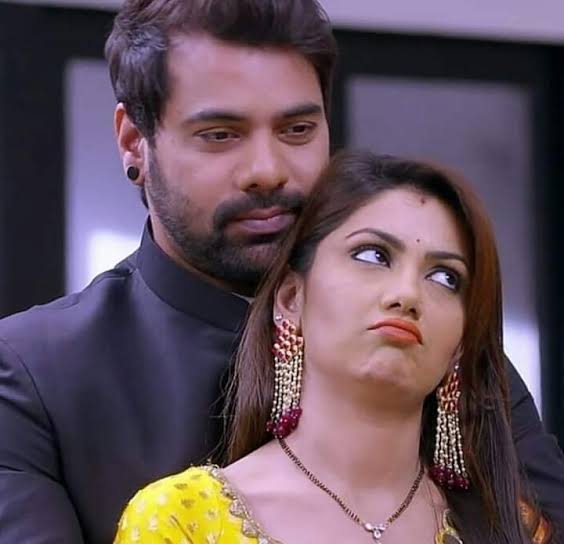 Pragya sees Abhi sleeping and thinks his stupid talks make her smile and prays god to keep him same always. She then goes to sleep.

Abhi wakes up and thinks she is sleeping peacefully, but he is not getting sleep. He sees idol’s sword moving, gets afraid and wakes up Pragya. Pragya also sees sword moving but says it is just his imagination. He says her specs number has increased and there are ghosts all around and will kill them.

She says they should go and check. He asks her to go first. She scolds her and asks to follow her. He goes in opposite direction frightening. She sees god’s idol and tells he is very fattu, it is god’s idol and not ghost. He says he will not come . She drags him and shows idol, says it must he jungle god. He asks jungle god will help only jungle people. She says god helps everyone.

He says then why are they in jungle and kidnapped, etc..She asks him to be silent. He says he will walk out, leaves, gets afraid and stops and says he came back for her. she prays god to make Abhi also believe in god.

Aaliya telling Abhi she cannot stay without him and even Purab, if he gets her married to Purab, she will not trouble Pragya or her sister. He does not reply and silently walks out.

Abhi apologizes Sarla for troubling her and says he did not have any other option. She says she considers him as her son, even then she did not believe him and slapped him, so she should apologize instead. Abhi says she reminds her of his mother and even his mother would have slapped her if he makes any mistake, so now he is sure until, she is with him, he will not make any more mistakes. Daasi says she is also feeling like slapping him and asks him to go and apologize Pragya. He goes towards her. Bulbul sees him and walks from there smiling. Abhi apologizes Pragya and she hugs him and cries emotionally. He also gets emotional and reciprocates. Everyone gets happy seeing them hugging.

Pragya runs to her room, reminisces Abhi apologizing her and proving her innocent and gets happy. She looks at moon and sees Abhi’s face in it. Bulbul comes there and says she is happy for her, etc. She takes her from there.

Rachna is on her way to marriage venue. Suresh calls her and asks if she is fine. She says yes and asks if marriage finished. He says marriage did not happen and asks her to go home and he will come there in some time.

Abhi tries to apologize Suresh. Suresh says he does not have to apologize as he knows he has some vested interest in this and troubled Pragya a lot, if he had believed her, then what was the use of all this drama, he says he is a psycho and needs treatment. Abhi silently listens him. Purab comes, hugs him and thanks him for rescuing Pragya.

Mitali and Tanu come to Aaliya’s room and ask what did Abhi say. She says he warned not to trouble Behenji and her family. Tanu says Abhi cannot see anybody in trouble. Aaliya says he slapped her for the first time because of Behanji, she feels like slapping behanji. Tanu says situation is not in he favor and if she does anything, it will backfire her. Aaliya asks if she wants her to change, then she is wrong, she will be same forever, she thought Tanu wold help her, but she was wrong, now she would do anything to get back Purab and will not help Tanu from hereon. Tanu says she is thinking wrong and anything she does will backfire her. Aaliya says she wants Purab and can do anything now, she has to decide if she wants to help her or not from hereon.

Pragya asks Bulbul where is she taking. She asks her to silently walk and see herself. She takes her down. Daasi praises Pragya that she is lucky to have such a bahu. Sarla also gets emotional. Bulbul says Abhi should make Pragya wear mangalsutra again and asks him to go ahead. He takes mangalsutra from Pragya and takes it towards her neck.