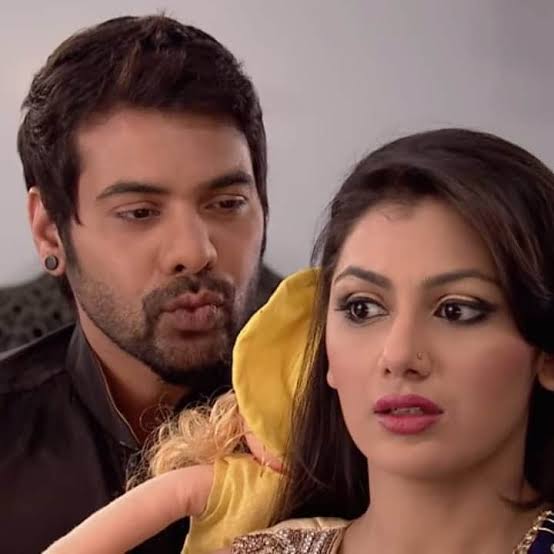 Tanu tries to walk out between rituals, Daasi stops her and says if she wishes something during rituals, her wish will be fulfilled. Tanu excitedly asks if she is telling truth.

Daasi says yes. Abhi holds Pragya’s hand and performs pheras around lohri fire. Everyone claps for them. Aaliya thinks her worst phase will be over soon and though Bulbul will perform pheras with Purab, she will be kicked out soon. She sees tanu praying and asks what is she doing. Tanu says she is praying to separate Abhi and Pragya and marry Abhi soon. Aaliya asks her to continue praying.

Pragya takes Abhi to the corner and says she wants to tell him something. He angrily asks what and says he is in a big tension. She asks him to tell what tension he has. He says she is her half tension. He asks what about another half. He thinks she does not know about Tanu and asks her what she wants to say. She tries to speak, but sees Purab and Bulbul and stops. He asks what she wants to say. She nervously shakes her hands and says she gets nervous seeing him. Tanu comes there and asks Abih to come with her. Abhi says he will listen to Pragya first and then her. Tanu says he has to listen to her first and drags him from there. Sarla sees them going and thinks of asking Pragya, but daadi takes her other side.

Bulbul gets angry over Tanu and tells Purab that she purposefully took Abhi from there and wants them separated soon.

Tanu takes Abhi to a corner and asks what was he doing with Pragya. He says she wanted to tell something important. She says she wants him to take her to his house as her parents are coming there to talk about their marriage. Abhi is shocked and says he will speak to them in his way and she should not interfere.

Bulbul scolds Pragya for not proposing Abhi yet and says if she does not, Tanu will take away Abhi.

Tanu comes to Abhi’s home and meets her parents. She asks Abhi to meet them. They both ask if he is married and wants to know from him. Tanu says Abhi was forcefully married by her grandma, soon he will divorce his wife and will marry her. Mom relaxes and says she was worried. She asks about Abhi’s family. Tanu says they both can meet abhi’s family in backyard as they are celebrating holi. Mom says they can and gets up. Abhi says they cannot as they must be tired after their traveling and can meet them later. Dad says he is right and asks him tell about his professional and personal life.

Bulbul scolds Pragya for delaying and says now Tanu will play her tricks. Bulbul says she gets nervous in front of Abhi and is unable to speak. Bulbul asks her not to get nervous and propose.

Abhi’s parents praise Abhi for his sense of humor. She asks if his wife stays with her and asks how can he stay with a poor girl, does not he get disgusted and it is a hell for him. He starts praising Pragya and says she is down to earth, is a teacher, knows to handle situation, etc. Mom says then she should meet her.

Taiji and Mitali gossiping about guests. Pragya asks them if they saw Abhi. They both show opposite direction and say he must be with Tanu as she is also not seen here. They both walk out, leaving Pragya confused.

Tanu’s dad says Abhi Tanu told his new album is releasing. Abhi is engrasped in thoughts. Dad asks what is he thinking. He says he is thinking about a song. Dad praises for his hard work. Aaliya comes there and greets Tanu’s parents. Tanu’s dad asks her to bring Pragya. Aaliya gets tensed, but says she will call her and leaves with Tanu. Abhi says they should not call Fuggi here. They walk out ignoring him. He thinks of taking Purab’s help, calls him and asks to come right now here.

Tanu tells about her plan and says that her plan of calling her parents and forcing Abhi is working and says if Pragya comes there, Abhi will get irked and divorce her. Aaliya says she made a good plan, but it will fail as Pragya has Daadi’s support and will escape. Tanu says she is right and says she will make Abhi promise her parents that he will marry her soon.

Sarla gets emotional seeing her daughters happy. Daadi asks her to stop crying. Sarla says her elder daughter is happy in her marriage and younger is getting married, so she is very happy and thinks it as a dream. Daadi says she will make her realize it is reality and asks Bulbul to call Purab and perform pheras around lohri to make their relationship stronger. Sarla says she is right and asks Bulbul to call Purab.

Pragya (who is a professor, but acts as a dumb, uneducated, abala naari) sees Tanu but not Abhi with her and thinks of asking her about Abhi. She asks Tanu where is her husband. Tanu says he went with her, but she does not know where he went later. They both start an argument and Tanu challenges her that Abhi will soon divorce her and marry her. Purab comes there and asks Pragya what is she doing here when Abhi is in house. He asks her to go and propose Abhi right now. She thinks she will propose her right now.

Bulbul meets Purab and tells that Daadi wants them to do pheras around lohri. Purab takes her to the corner and says if he does pheras, he will consider that their marriage is over and then they should move forward with next ritual. She asks what is that. He says suhaagraat. She gets shy and says if he does not agree, she will inform Sarla. He asks her not to and asks to kiss his other cheek. She argues first and then asks to close his eyes. He does. She kisses his cheek and hugs him. Aalia sees that and starts fuming in jealous.

Tanu’s dad asks Abhi where is washroom. Abhi shows him the way and thinks why did not Purab come yet. Tanu’s mom asks what happened, if there is any problem. He thinks they are his problem. He then says he is waiting for his wife and says he does not consider her as wife, but she does. Servant comes and asks if he should call bibiji. Abhi says he has phone and says he will suspend him. Servant leaves. Abhi makes fake call and asks Fuggi to come here right now as his guests are waiting. He then boasts that he has to scold her, else she will misuse his lenience. Tanu’s mom says he is right.

Pragya comes inside home and sees Abhi with Tanu’s parents. She thinks they must be the problem Purab was talking about and asks Abhi what problem he has. He thinks it is his imagination and he is hearing Pragya’s voice. He sees her and gets surprised seeing her.