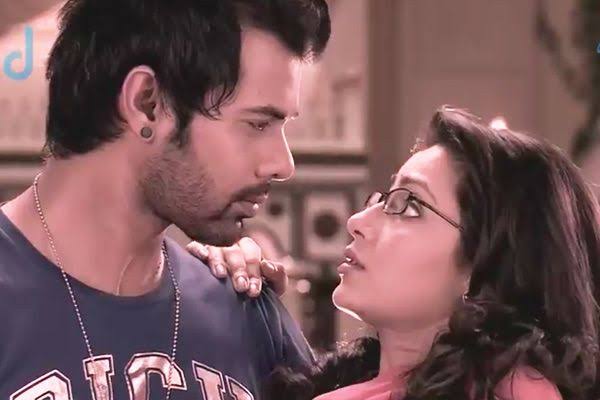 Twist of Fate 25 June 2020: On Twist Of Fate Thursday 25th June 2020 ZeeWorld Update, Abhi telling Pragya if she does not agree to marry Suresh, he will press send button and upload her MMS.

She stops him and says she agrees to marry Suresh. She runs to Daadi’s room and requests him to wake up, else her family will be ruined.

Abhi goes to Aaliya’s room and she asks what was he trying to do out. She says she is very innocent to understand Pragya’s plan even after studying in abroad and says wherever her thinking stops, Pragya’s thinking starts. He says Pragya does not want any alimony so that she can come back here and brainwash Daadi again, says once she marries Suresh, she will be permanently out of his life, else no. Tanu says after that, they will marry soon and hugs him.

Purab drops Bulbul to her locality. A sad song…ishq kare to rab hi jaane…. plays in the background. Purab says she does not want to meet him again thinking about Sarla, but it is god who has united them and he does not have courage to separate from her again. He holds her hand and they both reminisce their happier days. Do pal ka yaadon ka karwaan hai…..song plays in the background. They both walk in opposite direction with tears rolling down their cheeks. She thinks she wanted to tell him that without his help, she could not have helped Pragya.

Suersh meets Bulbul and says his MMS with Pragya is fake and he is very much worried about Pragya. She says he is the biggest problem in Pragya’s life and because of him, Pragya and Abhi are divorced now. He is shocked to hear that. She continues blaming him.

Pragya at her room thinks she agreed for marriage, but she has to do something to stop it. Abhi comes there and starts searching his pend drive. He blames it on her and finds it on floor instead. He then start searching his headphone. She finds it for him. Their head strikes and he says she is the biggest problem in his life and once she gets out of his life, he will marry Tanu. Pragya says he may have convinced her, but not Suresh, suresh will not agree and his plan will flop.

Abhi reaches Suersh’s home in the morning. Suresh asks what is he doing here. Abhi says people do mistakes in their youth and even Suresh has done one. He asks since how long he loves Pragya and says he has seen him peeping at Pragya’s window. Suresh asks him to stop his rubbish. Abhi picks apple and asks when he can snatch his wife, why can’t he take his apple. He says he is stressed peeping at Pragya. Suresh says he is talking too much. Abhi says Pragya is not his wife now and he has got a good offer for him, says he hit him for MMS issue and now he will reward him for it. He forcefully makes him wear sehra/groom’s cap and says he wants him to marry Pragya.

Abhi asks him go soon and start his marriage preparations. Sursh asks him to stop his rubbish and says he cannot think wrong about Pragya. Suresh says he is caught now, so he wants to get away from Pragya, says if he does not agree to marry Pragya, Pragya will be ashamed of her life and will face insults from everyone.

Abhi frightening Suresh by telling if he does not agree to marry Pragya, Pragya’s MMS will be leaked and people will insult her. He says even his reputation will be ruined as he is a teacher and his students will bully him that he is a cheater and not teacher. Suresh reminisces Bulbul telling that he is the reason for Pragya’s troubles and says Abhi that he is ready to marry Pragya. He says respects Pragya and cannot see her insults, says he was unfit for Pragya and it is good he divorced her, even he is unfit for her, but will marry her to save her from people’s insult. Abhi says he did not listen to his lecture and asks him to get ready for the marriage video.

Tanu thanks Pragya for lending her way to marry Abhi. Pragya says if Abhi will know her cruel side, he will hate her. She says he will not believe it and drops Abhi watch on floor while playing with it. Pragya holds it and says when she cannot take care of his things, how will she take care of his house. Tanu says she will take care of his heart and house will be taken care by servants. She asks if she is in love with Abhi and says it does not matter to her now as she is marrying with him anyways. She asks Pragya what gift she needs in her marriage. Pragya says she can bring red rose bouquet and its thorns will remind her how she feels when she sees her with her husband. Tanu gets irked hearing that.

Abhi comes to Sarla’s house. Sarla asks where is her daughter. Daadi says she ruined her daughter’s life and wants her daughter back now. Abhi says he did not came to listen their taunts and has come to invite for a marriage at his house. They are surprised and Sarla asks whose marriage. He says Pragya’s. Sarla asks with whom. He says with Suresh. She slaps him and asks who is he to take this decision when she is still alive and says if her daadi was awake, she would have felt ashamed of him. She says Pragya will not agree for it anyways. He says she has agreed. She is shocked to hear that.

Abhi says even after being so good to them and thinking good of their daughter, they are blaming him and says whatever they think, he will get Pragya married and fulfill his responsibility towards her.

Mitali goes to jail and says Raj that she will get him out soon. He says he does not want to come out and for whom he should come. She says she and his kids care about him a lot and wants him back. He says whole world is full of lies and without proof, she cannot get him out, he is waiting for court’s order and once it comes, he will be in jail forever, so she should stop thinking of bailing him out and should not come back there again. She says she will do something.

Abhi comes home whistling happily. Aaliya asks what is the reason. He says he is waiting for Pragya and Suresh’s marriage and once it happens, he will be free. Tanu says they can marry after that. He sees Pragya carrying water and asks Aaliya why did she allow would be bride to work. Pragya asks her to stop joking and let her go. He takes tray from her and gives it to servant. He says his puppets Tau and Aaliya that they should get Pragya’s mehandi and makeup done. Aaliya says they can get her manicure also. Tanu asks what about the black mark of infidelity on her forehead. Aaliya says that will fade away as she is marry Suresh. Pragya asks them to stop their taunts. Abhi says she should be happy now that Suresh has agreed to marry her. She is shocked to hear that.

Twist Of Fate Thursday 25th June 2020 ZeeWorld Update; Abhi says Pragya that Suresh got happy hearing about marriage proposal and is eager to marry her, he may bring baarat today itself and must be busy selecting matching specs frames with his sherwani. She says it cannot happen. He says this has happened and he has even invited her family, he will book their honeymoon package also.