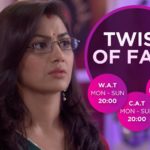 Twist Of Fate Saturday 13th June 2020 Zee World Update, The episode starts with inspector asking Abhi not to interfere, else he will have to be behind bars and starts searching whole house.

Daadi asks why police came to her house on diwali day. Aaliya says Abhi saved Pragya’s marriage hall and went behind bars, they have come regarding the same case and searching their house. Taiju taunts that instead of being laxmi, Pragya has become menace for this house. Mitali taunts that all evil spirits enter on amavasya day. Tanu taunts Daasi that she was praising Pragya, now what she has to say. Abhi thinks what they are searching. Inspector gets the document he was searching and comes down. Abhi asks him to stop his suspense and tell what was he searching. Inspector says the marriage hall for which got stay order was illegally approved by passing orders and he came to get those papers. Pragya takes inspector to the corner and says this marriage hall is in my mother and my name and he can arrest her instead of her husband. He says she is mistaken and he came to arrest someone else. He goes and says he came to arrest Raj as he passed marriage hall stay orders by taking bribe. Raj says he did not take bribe in his lifetime. Taiji says he did not take even 100 rs till now. Inspector says he got order papers from his room and arrests Raj. Mitali says inspector that her husband is innocent. Inspector ask her to stop her drama and takes Raj in jeep.

Mitali starts alleging Pragya for getting Raj arrested and asks what did she speak to inspector. Pragya says she did not know Raj was involved in this. Mitali asks her to stop her drama and starts twisting Pragya’s hand. Pragya frees her hand and asks her to stop. Mitali says she will teach her a lesson and will beat her and kick her out of this house. She tries to slap her, but Abhi holds her hand and asks why is she slapping Pragya. Mitali says because of her, Raj went to jail. He says it is not her mistake. She asks if he loves her so much that he can let his brother go to jail. He says he has started loving her, so he is taking her side and says she will held even him responsible. She again tries to slap Pragya, but Taiji stops her. Mitali says she did not love Raj as a son at all, so she is taking Pragya’s side. Taiji says Raj went to jail because of your greed and she wants to know the reason behind Raj signing documents first, asks Mitali to walkout from there. She then apologizes Abhi and Pragya and asks them to forgive Mitali.

Mitali comes to her room and calls her dad. Dad wishes her happy diwali. She informs him that police arrested Raj and says because of my greed, I got Raj’s signatures without his knowledge and sent him to jail. Aaliya comes there and hears her whole conversation. Mitali gets afraid and says she was talking to her dad. Aaliya says she heard her whole conversation. Mitali says she did this as Raj does not give her much money and she did this for her children.

Pragya thinks if Mitali is telling truth, that means Abhi has also started loving her but does not know how to express it. Abhi comes to room and sleeps without talking to her. Pragya then thinks she must be thinking wrong and thinks Abhi is so good that he helps everyone, but hates her. She thinks even she used to hate him, but now loves him a lot, hope even he also loves her. Abhi looks at her and sleeps.

Mitali getting worried seeing Aaliya hearing her conversation with dad that she took Raj’s signatures on marriage hall demolition papers. Aaliya changes her track and says Pragya is behind all this and she is the one who brainwashed Abhi and made him stood against her and now she spoke to inspector and got Raj trapped. She says she will kick out Pragya soon. She comes out and thinks she got one more Pragya’s hater and soon with her help, she can get out Pragya from their house.

Abhi comes to police station and asks Raj why did he take bribe. Raj says he did not take bribe in his lifetime, then why will he take now. He says he does not know how those signature came on those papers. Abhi asks if those are his signatures for sure. Raj says yes but don’t know who signed them. Abhi says because of him, Daadi saw police raiding their home and he can easily bail him out, but does not want to as he has broken his trust and says if he is really innocent, he himself will come out.

Mitali meets Suresh and requests him to give tuition to her children. He says he is very busy and says he can refer his friend. She says Pragya referred him and asked me to request you from her side. Suresh agrees hearing Pragya’s name and says her children have to come to his house for tuition in the evening as he is busy during day. She agrees and gets happy that her plan is working.

Mitali informs Aaliya that Suresh has agreed for tuition, but she has to go to his house with children. Aaliya says it is good he agreed and says we have to prove in front of Daadi that Pragya is still having affair with Suresh and is characterless, then Daadi herself will throw her out. She says that we have to not let Pragya know about our plan, else she is very clever that she will ruin our plan. She hears candle dropping and gets worried, but Tanu comes out and says she heard about her plan and asks when is she executing it. Aaliya says tomorrow when Abhi goes for a concert with family. Tanu asks what if Pragya also goes. Aaliya asks Tanu to stop Pragya from going. Tanu says she will. They all happily shake hands.

Abhi talks to his guitar and says he will win concert for sure. Pragya comes there, and he asks if he heard his talk. She says no but saw him talking to his guitar. He says both are same. He then starts singing, and she corrects him. He says he did not ask her opinion and asks her to listen silently. She smiles and listens wither finger on her lips. Tanu sees them both enjoying and angrily walks out from there. After Abhi finishes his song, he says Pragya that she can clap now. She claps.

Abhi gets worried that his legs have swollen after playing guitar and thinks how will he play guitar in concert tomorrow. Pragya comes and asks why he has stopped practicing and asks if his fingers are paining. He says no. She goes and brings salt water. He thinks she is a magician and knows everything. She asks him to soak his fingers in salt water. He hesistantly soaks, but takes them out hurriedly. She asks if it water is hot. He says not hotter than him. She asks him to soak then. He soaks and asks how does she know about this remedy. she says when her legs used to swell after walking long distances, her daadi used to soak her feet in salt water and she used to get relief. He feels relief. She asks him to sleep now.