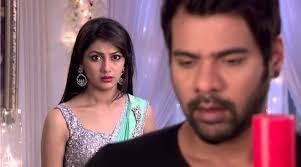 Aaliya says Tanu that if Bulbul would have met with an accident, she and Purab would have been even more closer, so she saved Bulbul.

She says if she suicides, Abhi will hate Pragya and Bulbul, but he started loving them and ignoring her instead, so she planned instead of being an enemy, she can get her plan executed acting as a friend, she will use Pragya in her favor and separate Bulbul and Pragya and also make Abhi hate Pragya. She says she just wanted to frighten Bulbul and make her think who wants to kill her and who pushed her in swimming. Pragya comes there and they both get tensed seeing them.

Pragya tells Aaliya that Tanu pushed Bulbul into pool. Tanu says she did not and asks what proof she has. Aaliya starts acting and asks Tanu being her friend how can she harm Bulbul when she does not have any problem with Bulbul and Purab’s marriage.

She says she is ashamed that she is her friend and says Abhi believes Bulbul as his sister and how can she harm Abhi’s sister. She says she will call police and takes her phone. Pragya stops her and says Abhi’s reputation will be at stake. Tanu asks her to call police so that the truth can come out. Pragya asks her to stop shouting and says again if they call police, Abhi’s reputation will be spoilt. Aaliya says she is right and they should keep an eye on Tanu now.

Purab drops Bulbul home. Bulbul says it is very late now and he should go back home. Purab worriedly says why did she go near pool, what if something happened to her. She jokes that she wanted a macho man, but he is phattu. He asks if she wants him to change and asks if all her love was fake. She says she was joking and he is her dream man and does not want him to change. He jokes that he will become macho now and also wants her to learn swimming. She says she is afraid of water. He says she has to learn for him and they both start arguing.

Abhi calls Tanu and says he was trying her number since a long time. She asks him to be with chasmish and not call her again. He tries her number again, but phone is switched off. Pragya comes back and tries to speak to him. He asks her to keep away from him and says because of her, Tanu is not talking to him. Pragya gets sad and sleeps on couch. Zindagi me……song plays in the background.

Purab tells Bulbul that they cannot unite Abhi and Pragya and only Pragya can convince Abhi now. Bulbul asks when will their bought clothes be delivered. He says today. She smiles. They both reach Abhi’s house with boutique salesman and give clothes for everyone. Aaliya likes her dress and asks who selected it. Pragya says Bulbul. Daadi asks where is Abhi’s dress. Salesman gives his blazer to Abhi. Abhi tries it and says it is oversized.

Salesman says owner has gone out for 5 days. Abhi says engagement is in 3 days and he wants it altered before that, else he will sue his owner. Bulbul says dressed can be altered today itself. Abhi asks who will alter it. She says Pragya. Daadi says that is call sarva gun sampann. Pragya gets shy and says she does not have tape. Salesman gives her tape. She takes Abhi’s measurement and goes to her room to alter his blazer.

Purab thanks salesman for bringing oversized blazer and lying that owner is out of town. Salesman says if Abhi will know about it, he will sue him. Purab says only they know and will not Abhi know about it. Once he leaves, Purab praises Bulbul for her idea. She smiles and enters home. Tanu stops her and says whatever she is doing to unite Abhi and Pragya will not work. Bulbul says she is dreaming. Tanu says she loves Abhi and he is only hers

Tanu stops Bulbul and asking how dare she is to try uniting Pragya and Abhi. She says Abhi is her and she will take back him from Pragya. Bulbul smiles and says Pragya has started loving Abhi and even he loves her. Tanu gets annoyed hearing that.

Abhi complains Purab about Pragya that she is very arrogant and always troubles him, may spoil blazer instead, so he should get another blazer. Purab says Pragya is a very good tailor and alters clothes really well. Abhi says if she really stitches well, she would have been a designer. Purab challenges that Pragya will alter his blazer.

Pragya alters blazer and gives it to Bulbul. Abhi comes down and jokes with daasi that pragya must have brought another blazer. Daasi says she herself saw her stitching. He tries blazer and comes down. Everyone are surprised to see torn blazer. Tanu comes there and reminisces cutting blazer once Pragya goes out. Abhi scolds Pragya and taunts Purab that he lost his challenge. He gives Pragya blazer back as her reward and asks Purab to get him a new blazer.

Bulbul confronts Tanu and asks how dare she is to harm Pragya again. She says she is called another woman in Abhi’s life and is looked at very shamefully in society. Tanu says she will ruin both her and Pragya’s life and will make Abhi divorce Pragya and marry her in 3 days. Bulbul challenges that Pragya will propose Abhi in 3 days and will unite with him.