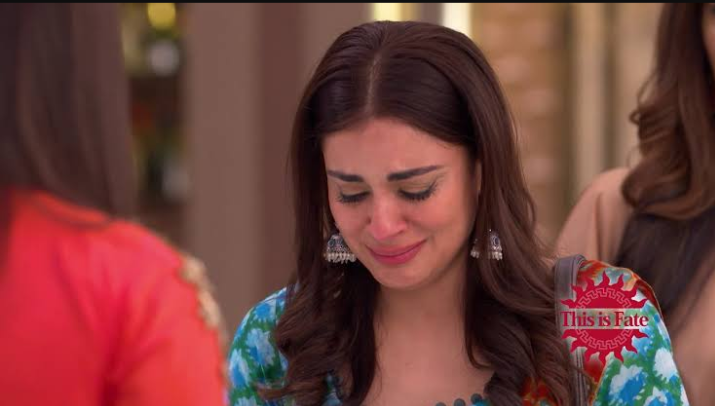 On This Is Fate 2 Saturday 13th June 2020 Update On ZeeWorld, Prithvi thinks that he is gone and now they both will land in jail, he advises that they both must go away from the place as otherwise they will get caught, they leave.

This Is Fate 2 Saturday 13th June 2020 Update On ZeeWorld

Bi Jee says that Rishab loves Preeta but Sara; does not listen, Bi Jee says that if this is the case then why does Janki see Prithvi in her dreams, she because of being scared does not answer, Sarla gets angry and says that Prithvi is to marry Preeta and Rishab with Sherlin, she says that she also cares for her and when they find the person who did this to her then they will make him go to jail but it is not |Prithvi.
Preeta and Karna try to unlock the phone but are unsuccessful and just then it shuts down, they decide to go to their house and charge it after that they will get help of his friend who will help to unlock it.
Prithvi ask Sherlin to stop moving her legs, she says that he does not understand how bad the condition is but he does not understand, she says that he must have listened to her at the first and not included Manisha in his plan. He says that she never betrayed him and always did everything for her, she changed false allegations on Karan for molesting her to Protect Sherlin, this was the only reason he included her, She says that he must have Karan killed, he make fun of her saying that even if Karan coughs it becomes a headline so he cannot be killed, they start to figure out a plan to save themselves.
He begs her to protect him, she says that she will go to Manisha and try to convince her to take back the case meanwhile he must go to Billa and order him to act like a mad person so the police must figure out that he is a psycho and let Rishab go as this is the only way they will be saved.
Sherlin rings the bell of Manisha door, she seeing her gets angry and shuts the door, Sherlin does not leave and continuously starts to ring the bell at which Manisha gets frustrated, she drags her in and threatens to hit her with the vase if she continuous to irritates her.
Karan and Preeta come to the house, she is not able to get out, he helps her but when she is coming out her Dupatta gets stuck in the car door, she asks Karan to not help her as she will do it but he insists and in doing so ends up tearing it from the corner.
He apologizes her asking her to not scold her and he will buy her even more dupattas but she must not say anything to him, she asks how does he know which Dupatta is her best and he always ends up tearing them, she threatens to hit him really and if he tries to help her, he says that he was just trying to help her, he says to her dupatta to not come to him and he will not like to talk to her.

This Is Fate 2 Saturday 13th June 2020 Update On ZeeWorld; Manisha asks her to leave, she says that Sherlin has gone mad thinking that Manisha will marry Karan, she says that she knows Manisha still loves Rithwik but he will not come back and she must move on, she further says that she cares for her and is always thinking of her and how she will survive in this cruel world, she further assures her saying that she knows Manisha does not consider her to be her friend but she cares of her, is also worried for her wellbeing. She says that she is also not sure that if Rishab is the killer.
Manisha says that she heard it with her ears in the police station, she asks how did Sherlin change sides and suddenly thinks that the Luthras are innocent, she says that she thinks that someone else is behind all of this and trying to take revenge, Manisha says that it could be Prithvi, Sherlin tries to disagree threatening that she will have her killed if she tries to double cross her, Manisha say that she will go to jail if they try to harm her.
Sherlin says that she must take back the case and marry Karan as he is a rich and good boy, she says that Rishab will come out as the Luthra\s have a lot of money, She throws Sherlin out of her house calling her an idiot girl, Sherlin thinks that Manisha is not listening to p her.

Shrishti is in her bed and not able to sleep, she is continuously thinking of Samer, she thinks of how he cares for her and is always there when she is in trouble with a worrying face, he is also thinking of her, he says that she is a bit stupid but very cute. She says that he is idiot.
She is not able to sleep blaming Samer for it and decides to do something.
Karan says to Preeta that she can stay with her torn dupatta and he will go into the house, she argues that she will be the one to enter the house and in the fight her dupatta gets stuck on Karan face, he brings it back getting very romantic making her wear it, he wipes her tears after which they both walk together towards the house, getting nervous they walk in.
Prithvi is drinking thinking of what Manisha said in the court, he thinks what she said in the court thinking that when she was blaming Rishab, he got angry and tried to suffocate her but when he realizes that Prithvi was the real mastermind behind ruining his life, then he will be killed as Karna would not let him get away.
He gets angry blaming that when the public sees any phone they take it but why was it not done with Billa’s phone, he thinking of it starts to blame those who hire them saying that must give more money so that they should also have good phones, he thinking of it makes a plan to steal it.
Shrishti and Samer both walk on the terrace, they both greet each other asking the reason for being there, she says that she came to enjoy the good weather, he also says that he was restless and so came to enjoy iot. She thinks it has the same feeling like her.
Samer asks her to sit with him, she apologizes him for everything that happened in the police station, he says that he had enjoyed it and she must not even think of apologizing, he says that the weather is very cold, she shares her shawl with him, just then Karina comes and orders Samer to go to his room, when he leaves she also tries to leave but Karina stops her saying that she must only focus on her work and not try to get interested in Samer, Shrishti tries to deny it but he orders her to not talk in between, Karina thinks that she is trying to marry Samer but she will not let it happen, Shristhri thinking that Karina feels that they both were romancing leaves.
Samer is in the hall, Karina comes and says that he must not get distracted otherwise she will have him sent back to his family, she orders that he must get away from her and keep within in his limits, Shrishti comes and hears everything, Karina seeing this gets angry, a bell rings at the same moment, she orders her to open it, everyone also comes asking Karina why she was not opening the door.
Karan enters and hugs Shrishti in excitement, he comes and also starts to hug everyone but none is able to understand the reason behind it, Mahesh asks him why he is so happy.
They all ask him what happened, he says that he has found it, Preeta tells that they have found Billa’s phone and when he was planning to plot the accident, and he was constantly talking with him so they will now be able to find the real mastermind after which Rishab will be free.
Karan says that this was all possible because of Shrishti and her went to Billa and started to interrogate him during which he told her about the phone. They all start top praise her at which she gets really happy.
Prithvi and Sherlin are talking, he ask her, he says that he knows Manisha did not listen to her, she gets shocked asking how he knows this. He tells her that he knows her more than anyone else and she is the person who can make anyone win.

This Is Fate 2 Saturday 13th June 2020 Update On ZeeWorld; Karan tells everyone that he has Billa’s phone but it is unfortunately dead so he will charge it and get it unlocked with his friend after which they will be able to know the real person behind everything.
Prithvi is talking with Sherlin saying that he will go and steal the phone before anyone is able to have a look at it, she suggests that he must not take the risk but he asks her to only think positive.
Dadi asks Karan if he will be able to bring \Rishab out, he says that he will do anything to bring Rishab home, He start to hug everyone, Kartika asks Preeta why she is crying, Shrishti is about to hug Karina but then steps back.
Sherlin plans to go and help Prithvi as he will not be able to do it alone, Prithvi is thinking that he must get away with it but only fears that if he gets caught then he will be able to marry Preeta, he seeing the time gets relieved that almost everyone will be sleeping at this time.
Preeta says that she is happy because now Rishab will be free and the real person will go to jail. Karan comes to her and holds her hand.