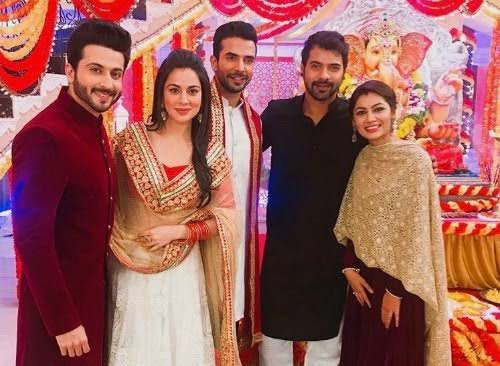 This is fate June 2020 teasers: Sameer and Shriti keep growing close and Sarla is increasingly worried about Karan and Preeta spending too much time together.

This Is fate June 2020 Teasers ZeeWorld

Karan promises to free Rishab from jail While Preeta takes it upon herself to console everyone. She also confronts Monisha.

Preeta is scorned by Karina when she visits the Luthras. She is blamed for the family misfortune. Manisha considers the events and starts having doubt that Rishab is the real culprit.

Karan gets a lawyer to take up Rishab case. The evidence are proving favourable meanwhile Privthi also visits Billa to cover up loose ends.

Sherylin confesses to killing Ritwik when Monisha confronts her but she manages to convince her that it was for her good. Rishab gets ready for his court hearing, what fate awaits him?

Preeta accuses Privthi of visiting Billa. The court hearing goes bad when Monisha accuses Karan of trying to kill her and Rishab for killing her fiancee. Karan get arrested because of his anger issues.

Rishab can win the case if Karan and Preeta find Bila’s phone at the scene… they have no idea Prithvi and Sherlyn are already at the scene. Who will find the phone first?

Sameer and Shriti keep growing close and Sarla is increasingly worried about Karan and Preeta spending too much time together.

Aunt Karina is disgusted by what she sees between Shriti and Sameer. Prithvi is at the Luthra mansion to steal the evidence.

Karan and Preeta take the phone to the police to prove Rishab’s innocence, but the main proof has been stolen from the phone.

Karan makes a deal with Monisha. This free’s Rishab but angers his mother.

Monisha notices a different look coming from Preeta towards Karan and it bothers her that she could stand in the way of their love. Karan regrets agreeing to marry Monisha.

The Luthra’s have come up with a way to disrupt the wedding and save Karen from marrying the wrong girl.

Bila escapes from prison and is disguised as a servant at the wedding. A young lady stops Karen from marrying Monisha, she has some shocking news to reveal.

Monisha manages to win Karan and during the wedding procedure, Karan can’t stop thinking about his love for Preeta.

Bila has a knife pointed at Prithvi in Karen’s room, but they are interrupted by Karen walking in and Bila escapes.

The love triangle continues between Preeta, Karan and Rishab. Janki thinks Preeta should marry Karan and is now part of the scheme to stop Karan from marrying Monisha.

Monisha has been drugged and lies weak on the bed. The wedding must continue so Preeta wears her wedding clothes.

Bila is alive and has a gun on Prithvi in front of everyone. He finally confesses who hired him to kill Ritvik.

Shriti is jealous when she realises Tanvi flirting with Sameer.

Rishab is drugged at the same time as Sherlyn. This breaks the two families when they find them in Rishab’s room in a very compromising state.

Everyone feels Rishab and Sherlyn went against their rules about sex before marriage.

Sherlin manipulates Preeta and corners her with threats after Preeta reveals that she knows her biggest secret.

Shriti gets jealous when she see’s Sameer and Tanvi having a chat.

After Sameer and Tanvi’s chat, Shriti has a lot to think about.