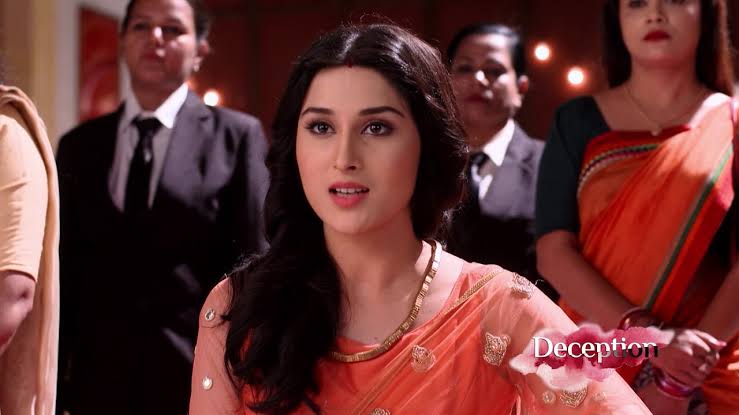 On Deception Wednesday 27th May 2020 update on ZeeWorld, In the scene Surbhi was telling Angraj that Pooja is ready. Angraj gets mesmerized seeing Pooja in bridal attire and praises her. Surbhi says I will not trouble you both and leaves from there.

Angraj asks why she is hesitant when she is becoming his and says bye to Naren. He asks her to show her face. He says I am ready to give anything for her. Pooja holds his hand and says 1 min. She sits on the bed. Angraj smiles. Pooja asks why you are so eager when I am ready to sacrifice anything. She asks you became Naren’s duplicate and says this lehenga color is his favorite color.

She says she still remembers the night when she was wearing similar bridal clothes, when he came to her, lifts ghunghat and made her wear necklace and then. Angraj couldn’t tolerate and throws money on her.

Deception Wednesday 27th May 2020 update on ZeeWorld; Pooja asks you get angry again and says did you learn this from Naren also. She thanks him for loving her and says nobody has someone else jhoota now a days.

Dasi comes and says perfume was outside. Angraj asks if it was Naren’s choice. He asks Pooja to burn Naren’s all memories else he will kill Dasi. Pooja says she will throw all Naren’s memories and throws the bangles etc.

He asks her to take off her lehanga. He holds her dupatta and throws it far. Pooja pleads infront of him to let her go. He is about to touch her. Pooja asks her to stop and says if this is his love and says such love can’t get the aim. She goes and changes the clothes given by Angraj and covers herself with blanket. He asks him to remember that a woman’s anger is sufficient to end him.

Angraj stamps on the dress. Pooja cries and thinks Naren and Anuj are not with her, and even Satish, Supriya and Harish is not with her. Anuj’s soul comes and says I am with you. He says you are angry as you couldn’t see me last. He says I was destined to die and jiju was just the medium. He asks her to take revenge from Angraj and asks him not to fulfill his conditions.

Pooja says I didn’t agree. Anuj smiles and leaves. Pooja tries to stop him, but in vain. She remembers his words. Angraj changes his curtains to black and says night will happen at 11 am. He puts black cloth on Rahul’s head and asks if he can see anything. He says no. Rahul and Surbhi panic. Angraj asks them to make his room look as in night.

Deception Wednesday 27th May 2020 update on ZeeWorld; Dr. Kiran nurses Naren’s wounds. He says you are also hurt then why ointment to me. He says Pooja will get me killed one day. Dr. Kiran says I won’t let anything happen to you until the things are in my hand.

Naren says if your baba sees you then will not leave you. He says if I see you then I get a ray of hope that still someone has a heart. Rahul is going out of house. Danish thinks to follow him. He follows him in the car. Rahul thinks just 2 days more and thinks once he gets the mould, Naren’s fingerprints will be taken then vault belongings will become his. He comes to the tribe and gives him money. He smokes. Neelima and Rahul make the room ambience look like it look in the night.

Angraj says Pooja will become mine. I have wiped out. Neelima asks why she is taking so much time. Pooja comes wearing red bridal dress. Angraj, Neelima and Surbhi looks on. Pooja sees burning coal all in the room and a bed kept in between. Angraj says either you will unite with me or you will become ashes while crossing this coal. He steps on the coal and says these clothes etc are of my choice. He says I hope you like it. Neelima and Surbhi looks on shamelessly and smiling. Angraj says I like my choice and asks Pooja to select the way and agree to his saying. Pooja thinks she is stuck and thinks Naren..please help me.

Pooja thinking about Anuj’s words. Angraj tells that he has moved red roses from the room and got white flowers truck for her. He asks her to make up her mind till that truck reaches here. Pooja says she has made up her mind and sits on bed. Surbhi and Neelima sign Angraj and leave. Pooja asks Angraj to find out when truck will reach. Angraj calls someone and tells Pooja that truck will reach soon. Pooja thinks she shall not let Angraj complete her condition and then he can’t touch her. She calls Danish. Rahul sees Danish and thinks if he imagined him. A servant comes there. Angraj thinks he is staring Pooja and threatens to kill him with glass piece. Pooja stops him and asks him to leave the man’s life as a gift to her. She gets injury on her hand.

Dada ji asks where is Pooja and says he will call her. Angraj tells her that he will not leave anyone who look at her today. Dada ji knocks on the door. Angraj says no need to open the door. Dada ji calls Pooja. Angraj threatens her and tells that nobody can see your face instead of me. Pooja opens the door and tells Dada ji that she is busy being CM of the state and have much responsibility. She asks him to go with Supriya. Dada ji gets sad and says he forgot that she has many responsibilities.

Pooja thinks I have to talk to you rude thinking Angraj will hurt you in his madness. Danish calls Pooja and tells that he got the truck wearing Police uniform. She asks why did you come infront of Angraj’s goons.

Angraj comes near him. Pooja tells him that she got Rachel’s call. Angraj says they will take the selfie and clicks it with her. He says he will delete all Naren’s pics. Dr. Kiran thinks of Naren and thinks for the first time, a man gave her so much respect. Song plays….Angraj asks Pooja to come and sit on his lap. Just then his men come and gives the flower boxes. Pooja thinks when Danish got the truck then how these flowers are here. Angraj says now there is no white flowers or Danish will come between us. He shows his clothes soaked with Danish’s blood.

Pooja is shocked. Angraj calls Pooja from Danish’s number.He pushes Pooja on bed and asks why did Danish call you when he was Naren’s chamcha. Pooja says how do I know? Angraj ass how your Mama ji had reached there and took him to hospital. Pooja says Mama has broken alliance with me and I am captive here.

Deception Wednesday 27th May 2020 update on ZeeWorld; Harsha knocks on the door and tells about Danish’s accident. Angraj asks Pooja to change her clothes and come with him. Pooja says 1 min. Angraj looks at her and thinks of his plan.Rahul tells Surbhi and Neelima that Angraj haven’t told him anything before getting Danish killed. Neelima says he wanted to kill all family members by sending them to London. Rahul blames Naren and tells that he will go to Delhi and get the mould.

He says then they all will go to USA. They smile. Angraj thinks Pooja gave info to Danish about the truck. Supriya tells Harish that she is worried about Naren’s reaction. Naren comes and applies his saliva under his eyes and pretend to cry. Harish and Supriya try to pacify him. Naren thinks to know from Mama ji what did Danish tell him.