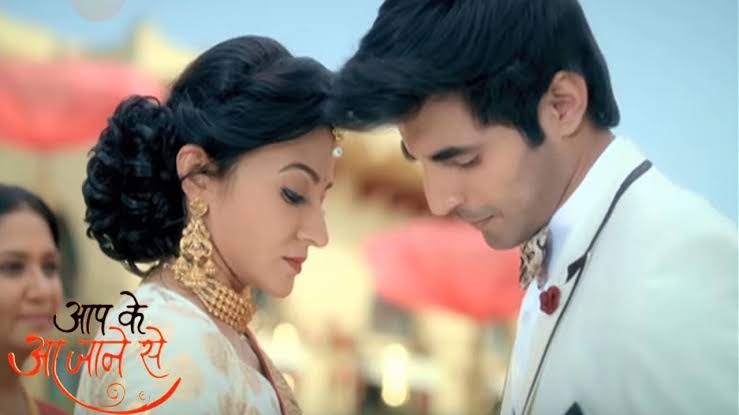 Age is just a number Thursday 25th June 2020 Zee World Update; Agarwal family reach the venue of competition. Sahil tells them he has invited a celebrity. Prachi was excited to know the name. Sahil says it’s Mrs. Vaidika Sahil Agarwal, his real wife. Sahil tells them to get seated in the VIP section for the celebrity performance. Bari Amma was determined to ruin all his plans soon.

Deepak tells Bari Amma he got his name in sponsor’s category, they will have to dance now and asks for her blessings. Bari Amma leaves without paying heed to him. Deepak drags Gauri into the hall forcefully.
Bari Amma was introduced in the competition as the guest and chief sponsor. A celebrity performance was announced from Vaidika Mathur. Sahil stood backdoor smiling as Vaidika gave her solo performance.

As the competition begins, first was Deepak and Gauri’s performance. Agarwal family laugh at their comedy filled performance. Devika watches the performance of second couple, then brings Varun to see it too. She comes to Vaidika worried that it’s not easy to win as it’s a tough competition. Sahil says the most important thing for a couple to win is the chemistry. Sahil takes Varun aside and says wars are won by determination, and they have to win for his and Varun’s love. Varun takes Devika for a last rehearsal. Vaidika tries Aarya’s number as they go inside.

Bari Amma comes to Vaidika and says it seems she got rid of the fears she held from her. Vaidika says she only respects her, why be afraid of her? Bari Amma says she tells Sahil to respect elders as well, not to fall in love with them. Bari Amma calls Vaidika shameless, she gave her space in the mandap to Nidhi but always wander around Sahil herself. She has no worth more than a mere dancer who found a chance to dance in the competition anyway.

Age is just a number Thursday 25th June 2020 Zee World Update; She would destroy her and throw her out of Sahil’s life. Vaidika leaves with an important task to perform. Bari Amma says she also has an important task to throw her out of Sahil’s life.
It was Devika and Varun’s turn now. Sahil and Vaidika stood fingers’ crossed. Everyone enjoy their performance. Sahil only stared at Vaidika all along the performance as well. Shruti and Puneet shared eye locks. Vaidika was happy to see their performance going smooth.

Bari Amma was called on stage for announcement of results. Sahil stood fingers crossed and says she must not pour her anger over Devika and Varun. Bari Amma announces Devika and Varun as the winning couple. They were cheerful as the couple receives the gift trophy and prize money. Varun gives his victory speech and takes Bari Amma’s permission to bring Sahil and Vaidika on stage, as the credits to his victory goes to them. Varun announces they are the best couple of Kanpur, it’s because of their efforts that he and Devika won the trophy. Devika brings the trophy to Sahil and Vaidika as they truly deserve the prize. Sahil takes the mic, he asks what does best couple mean? Those whose likes and dislikes are alike; share the same status, mentality, or educational institutes? Or those who love each other and accept the good and bad in each other, stay with one another in every difficult situation and hold their trusts unquestionably over each other; they are not affected by age in any way.

He says love is a simple thing, we complicate it; its requires a connection at heart. Best couples are formed when the chords of heart connect, regardless of gap in ages. The audience claps for Sahil and Vaidika’s couple. Agarwal family was furious except Deepak. Deepak thinks this will bring the biggest of twists in the story, he is sure Bari Amma won’t sit silent anymore.

Back stage, Bari Amma tells Agarwal family she needs to take a strict action to teach Sahil a lesson. Puneet offers to get Vaidika killed, but Bari Amma says Sahil would go crazy if Vaidika even gets a scratch. She sends the family home, promising to share the details later.
Inside, Sahil tells Varun and Devika it was a great favor from them as they helped him announce his relation to the world. Devika and Varun request Vaidika to give Sahil a chance and marry him, he loves her dearly. The couples take leave from each other. Sahil asks Vaidika if she is happy, but she leaves silently.

Sahil was at Vaidika’s house waiting for her. Nidhi comes inside speaking to Vaidika on phone, she was thankful Vaidika gave her a chance to be alone with Sahil. Sahil agrees to become Nidhi’s husband and celebrate with their friends, he asks Nidhi to cook as a good wife then.
At Agarwal house, everyone awaited Bari Amma’s idea for Sahil. Bari Amma comes to the room and says she would plan against Sahil and Vaidika’s relation this time, and win the game. Prachi says Sahil can go to any extent to get Vaidika.

Bari Amma says this time Vaidika would throw Sahil out of her life and house both.
Vaidika, Nani and Aarya were at Rahul’s place. Nani was complaining about the small size of the house. Vaidika gets a call from school that she must now pay full fees of Aarya as she no longer works here. Vaidika was worried about the expenses.
Sahil was partying with friends while Nidhi worked in the kitchen. Sahil teased her by his ever increasing demand list and tells her to hurry up. Nidhi was left messed up in the kitchen. Sahil tells Karan that Nidhi can never come equal to Vaidika.

Nidhi finally calls Vaidika and asks her to come home soon, she needs her help. Vaidika takes a leave from Rahul, Rahul insists on her to stay for a while. Aarya was also excited to come with Vaidika. She convinces Vaidika that she thinks whatever Sahil is doing is right and wants to be with him this time.
Sahil mocked Nidhi’s cooked break and other cooked food. Nidhi throws the tray down on floor and shouts she would never cook for anyone. She is a wife not a maid, he must treat Vaidika as a maid. Sahil clutches her arm clarifying she dare not say a word to Vaidika. Nidhi says she is his wife, his family considers her as their daughter in law. Sahil tells Nidhi it’s important to be a wife before being a daughter in law. He tells her to leave the house.