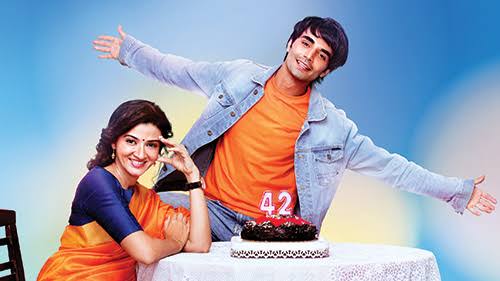 At Agarwal house, Puneesh tells Bari Amma he will send Vaidika behind the jail bars this time. Bari Amma says she will make Vaidika taste the dust of her feet.

Nidhi runs home and tell Bari Amma that Sahil is participating in Kanpur’s street racing, this is a dangerous motor cycle races and one can lose life in this race as well. He is doing this to arrange money for Vaidika. Anjana wonders why they always put each other’s life at stake for each other, she was afraid to lose her son forever.

In the car race, Sahil decide not to tell his real name, and calls himself as Rohit Malik. He was allotted 2 number bike. The organizer gets him sign a form that he would be responsible for any accident or harm to himself. He questions why he wants to put his life in danger. Sahil thinks about his promise to Vaidika and says he has come to win the game. The organizer shows him the competitors who are winning the game for last five years. Sahil gets his name registered.

Mohid watches Aarya changing shoes and wonders what Nidhi would get by defaming this girl. Still he can romance a tree as well for a car worth 35 lacs. Another dancer come to ask Mohid turn the television, the live race is being telecasted. Aarya was shocked to see Sahil.

Vaidika comes to request the organizer stop the game. Nidhi, Puneesh and Bari Amma also arrive blaming Vaidika. Vaidika requests Bari Amma to get the game stopped. They watch the motorcyclist dangerously swirling each other’s bike in competition. Sahil’s bike hit a tree. Everyone was shocked, the organizer announces Akash hit Rohit’s bike to win over him. Sahil gathers courage and takes a shortcut way to reach his destination. In a close competition Sahil was able to win the competition. Rohit Malik (Sahil) was announced as the winner.

Sahil jumps off the bike. He was cheerful for winning. Vaidika and everyone was shocked to see his bleeding leg, Vaidika tears her saree to bandage his injury. Sahil was announced as the winner of five lacs with a false name, Rohit Malik. He got a new bike as gift as well. A reporter asks Sahil the reason of his victory. Sahil says its love, and comes to Vaidika saying he wouldn’t let her go to jail.

He comes to Bari Amma and says she filed a case against his wife; he hands the bundle to Bari Amma demanding her to withdraw her false case. Bari Amma flies the money over in air. The crowd gets to pick up the money. Sahil says Bari Amma would get a lot of prayers through this, she needs it. He leaves with Vaidika.
Bari Amma return home curtly. Anjana comes worried if Sahil is fine. Bari Amma says no matter what you do, Sahil won’t come out of Vaidika’s love. She shouts at Anjana to go away from here. Puneesh asks Bari Amma to stay calm, she has to keep her eyes over the celebration of 50th anniversary of Agarwal Jewelers.

Its important Sahil is present there, after all he is the heir of this business. Bari Amma says she has decided to announce Sahil as company’s MD at this celebration. Puneesh appreciates her decision, she must explain to Sahil about his worth. Nidhi was happy to hear this, and says after all she is working to create difference between Sahil and Vaidika. Bari Amma leaves for shop. Nidhi was excited to rule the Agarwal Mansion as Mrs. MD now.

Bari Amma drives the car thinking about Sahil’s favors for Vaidika. A car stops in front of hers, blocking her way. Bari Amma comes out to shout at the other driver. Yash appears from the other car. Bari Amma questions if he doesn’t know the sense of driving? Yash says this applies on her as well, she is on the wrong side of road. She always put other’s lives in problems because of her mistakes. Bari Amma questions who is he. Yash says the one he will now confront.

Bari Amma asks who he is. Yash replies she was saved from him today, but next time fate might not support her. He narrates a story from twenty years ago, and asks if she now recall who he is? He has come here only so that she recognize him, he is the owner of Leela Jewelers. She must be happy that he is also an Agarwal, the son of Mrs Leela Agarwal. He will now revenge her and her family the way she made his mother suffer. He would snatch everything Bari Amma ever loved.

Bari Amma recalls a young boy demanding only five thousand to save his mother but she pushed him out of the house. Yash as a child challenged her to return for revenge one day. He says he has come to fulfil that promise, he will destroy her whole family; her daughters and specially her only heir Sahil. Bimla Agarwal must prepare for her destruction. After Yash has left, Bimla was worried that the family must never know the secret of Agarwal family hidden for years.

At home, Vaidika applies ointment over Sahil’s leg while he pulls himself back. She questions why he put his life at stake? Sahil counters why Vaidika put her self-respect at stake in the police station in front of Bari Amma and took Gauri’s blame over herself. Vaidika asks him to speak to Gauri. Sahil calls Gauri and asks her to share any problem if she has. Gauri assures that Bari Amma had announced she doesn’t care if it’s a girl or a boy; this is only possible because of Vaidika. Sahil smiles and more determined to protect Vaidika, Aarya and Nani.

Deepak was worried in his room about Bari Amma’s decision. He only wants a son who can be an heir to Agarwal’s property. Puneesh comes to his room and tells Deepak it takes a few hundred thousand these days to change the s*x; so it doesn’t matter if it’s a boy or a girl.

Aarya was selecting a dress for party as Mohid only invited her for party. Nidhi comes to her room with a dress as gift for her. She tells Aarya she is aware Mohid only invited her for party, he appreciates Aarya as she is really different and sweet. Aarya was thoughtful. Nidhi insists on her to keep it as a gift. She promises not to share it with Vaidika, and suggests she must change in the party. Nidhi asks if she took permission from Vaidika.