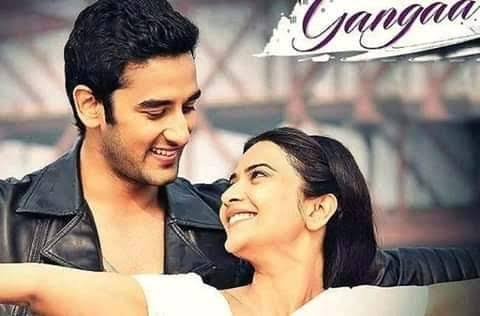 Sagar promises Madhvi to go to Banaras to fulfil Dadi’s dream, and resolve the matters of Pulkit and Supriya. Madhvi says if it’s for her only, they shouldn’t go. Sagar assures this all is for himself, they will go to Banaras but won’t stay in that house.

He can’t get his mother where Zoya lives. Madhvi tells him that she also dislikes Zoya’s presence there, but they can’t break their relation to that family.

Ganga picks Krishna up, Krishna insists on cycling. Ganga remember that Krishna is a blue baby, then warns her to drive slowly. Krishna races her cycle, Ganga calls her to drive slowly but Krishna was cheerful that she always drive fast. She reaches the spot and boasts about winning. Ganga says Krishna is a champion who can never be defeated. She judge Krishna is really happy today, it seems her music teacher appreciated it. Krishna was excited that her class is going for nature trip to Anand Ashram. Ganga was worried at once and dis allows Krishna to go on the trip, as she isn’t well know.

Pulkit comes to Amma ji. Zoya over hears from outside, Amma tells Pulkit that Madhvi called from London, Sagar is ready to come here. Pulkit was happy, but was worried what they would tell Niranjan; how he would react. Amma ji was ready to handle Niranjan but was worried that Sagar won’t step into the house because of Zoya. He isn’t wrong as well. Pulkit assures about speaking to Sagar.

Pulkit was ready to book a room for them in hotel, Amma ji says they must stay in the Ashram. She asks Maharaj ji to call Ashram as Madhvi and Sagar would stay there, he must send bed sheets and some other useable items to Ashram.

Zoya was worried and walks outside upset. Her lover stood there in the car and comes to her concerned. Zoya was worried what if Sagar and Madhvi attract Niranjan towards them and what if Amma ji insists on them to stay here what would happen to her? Her lover taunts that another heir would be added to her father’s heirs. He asks her for any help in the matter, Zoya was determined to do it by herself and walks inside. He was ready to help her this time proving herself.

The next morning, Krishna comes outside. She asks why are they packing her lunch and bottles when it’s a trip she can’t go for. Ganga tells her that she is going for the trip, Krishna cheers and looks towards Ganga. Ganga gets it, and bends to get a kiss from her. She shares with Kashish that she doesn’t want to steal Krishna’s childhood from her, she has informed her teacher about the reality who assured to take complete care of Krishna. It’s only about a few hours, she is sure nothing would go wrong.

Sagar and Madhvi stood on the airport, Sagar gets Amma ji’s call and asks if he is in the car. Sagar tells her that the car didn’t arrive yet. Amma ji says she asked Pulkit to send the car in time. Sagar counters that Niranjan must have forbidden him, calling from Delhi. He was ready to get the cab. Zoya smiled victoriously behind, and goes outside with her cell phone. She calls her lover who was sitting at a stall, she confirms if Pulkit asked him to go to airport. He replies that he thought this would give Sagar another chance to hate Niranjan, Zoya appreciates.

Ganga comes to drop Krishna, she complains that Ganga doesn’t care about her the way other girl’s mothers does. Ganga says she loves Krishna and wants her to be independent girl. They share hugs and kisses before the bus leaves.

Sagar negotiates the cab driver. Madhvi was ready to give the rent as per demand, Sagar was curt that Niranjan didn’t think once that they would have luggage. He didn’t even care about her, she was coming back after 7 years. Madhvi sends him to get water bottle and gets in the cab. Sagar comes towards the stall, Madhvi watches a temple nearby and prays that Sagar comes out of his curtness, getting peace of mind and heart.

Ganga drives her cycle near the stall, Sagar looks towards the back. A fruit vendor comes there, Ganga comes to the same stall Sagar stood a while ago while Sagar went to the fruit vendor. The stood on next stalls, Ganga turns to leave when she hears Sagar’s voice asking for another bottle, she looks behind but can’t see Sagar and wonders why his sound echo in hers repeatedly.

Sagar hears her cycle bell, and thinks that even the breezes of this city are filled with Ganga’s memories but he promised himself never to look towards her. He comes to check the newspaper about Ganga’s news. The stall man informs him about her, Sagar denies knowing her. He thinks he had a misunderstanding about knowing her, the reality is that he doesn’t know this girl at all.

Sagar gets into the cab, they drive along the school bus and can hear the children singing in the bus. He held his hand just like Krishna. Madhvi stops him, Sagar says he really enjoy this cold wind touching his cheek. There in the bus, Krishna replies the same to teacher. Sagar does this again, Krishna throws her stroller out of the bus window this time, all of a sudden she drops it and it flows over Sagar’s face. Sagar asks the cab driver to follow the bus, he needs to return the scarf.

Pulkit gets Ganga’s call, who taunts that she caught him stealing. Pulkit was shocked and left speechless, Ganga says if he came for something important. Pulkit says it’s about Sagar, but Ganga doesn’t want to speak about it. Amma ji comes there worried that driver didn’t reach to Sagar, she wants to go to Ashram right now. Zoya comes there saying she has been trying the driver but he isn’t picking up the call, how would they go to Ashram now.

Amma ji was curt that the driver is useless. Zoya doesn’t let Pulkit try the driver’s number, he watches Biwi calling and takes the call. Zoya asks where he has been, he must come home as they have to go to Ashram. She looks around then insists on him to understand if he doesn’t reach in time, he will have to lose his job.

Sagar and Madhvi reach the ashram. He sends her inside, and goes to pay the cab driver. Zoya curses Sonu to be an idiot, everyone was angry at her. She explains that they have to be cautious in whatever they does, they have to go to Ashram in anyway. Everyone come outside, Zoya scolds him to take her cautions seriously. Sonu tells Amma ji that they can’t go to Ashram today, the car engine is burning.

Pulkit was ready to hire a cab, Sonu says its five hour long drive and 3 pm already, and no one will take them to Ashram this time. They all go inside. Sonu was sure to remove Sagar from Zoya’s way this time, so that she married him finally.

The teacher takes the children on forest tour. Krishna stops in the way to pluck a flower, she asks her class fellow to move forward. There, Sagar came for a walk in the forest, envisioning Ganga running around playfully. He recalls holding her pallu moving to her playfully; then holding her tight by waist. She requested him to leave her, for the sake of friendship.

The scene vanishes, Sagar murmurs that Ganga has broken everything, their friendship, their relation, all the vows and promises. He turns away, while a snapper was pointing a gun towards Sagar from behind a tree. He calls Sonu demanding him for his money, Sonu instructs him to fire, he will get his money. Sonu cheers there won’t be a better way to become Zoya’s life partner.

Krishna was plucking flowers from a plant, when she hears gun shot. Everyone was afraid at once, Sagar wasn’t hurt but spots the snapper and follows him. The snapper turn from behind a tree again, he lost his aim once again. The teachers were afraid for the safety of children and hurry them outside the forest.

Krishna was alone in the forest and runs away. There, Ganga was feeling restless. Krishna stood in the forest alone, worried that no one is here. She hears the gun shot again. Kashish returns home to find Ganga worried. Ganga felt something bad is going to happen, Kashish says she had forbidden her to send Krishna. She insists that Ganga is worrying pointlessly.