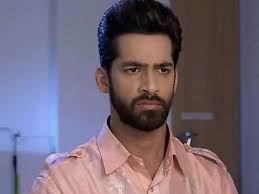 Mahek comes to Neev. He is crying. He is scared and hugs Neev. Karuna says I dont’ know whats wrong with him. He is always scared. The attendant says we should give him injection. Dolly says shut up. You are always giving him injections. Arman says he is doing his job. Mahek says aunt is right. I will take care of him. This man can go. Neev is always scared in his presence. Dolly says yes you can go we will take care of Neev. Arman’s man leaves.

Arman says nothing will happen to my brave Neev. Mahek says yyou should all go and rest. I will stay here with Neev. Arman comes to his room. He is very angry. he says first Shaurya ruined my plan and now this Neev. My man is also out of this house now. I have to do something.

Neev is sleeping with Mahek. She falls asleep. Neev tries to wake her up. Arman calls Nalini and says go to while chilies. This is our last chance to complete our plan. This plan will now be executed on home minister’s daughter’s wedding. We have to succeed in our mission.

Mahek wakes up. She says Neev? Do you want to say something? Please tell me. Neev is scared. He tries to tell Mahek about the mask. Mahke can’t understand. Neev hugs her and is scared. Arman and everyone comes. Mahek says he is really scared. Arman says let me call doctor.

Next morning, Mahek prepares Neev for Singapore. Arman says to Neev if you try to tell anyone that I am not Shaurya I will kill your mom. Mahek comes and kisses Neev’s face. Karuna says don’t cry Mahek. Send him with good prayers. He will come back fine. Arman takes Neev to the car. Neev keeps doing the mask sign to Mahek. Amran says I will be back in three days don’t worry. Arman and neev leave. Nehal says please stay strong di.

Mahek comes to hotel. She is all lost. Home minister’s PA comes. He says I want to discuss wedding layout. Mahek is still thinking about Neev. She recalls what he was trying to say. PA says to Maahek are you listening? She says yes. Mahek calls Arman. She says can I video chat Neev? He says you can’t talk to him in hospital. He brings Neev to his shed. Arman takes off his mask. Arman says if you want to stay alive don’t try to contact your mom.

Mahek meets Kanta and Neev. Mahek says he is worried. He was crying and scared. Kanta says Shaurya is there for him. You have to take care of yourself. Come home with me. You will feel better.
Nalini calls Arman and says I have learned everything about the wedding.

MAhek comes to food truck to take the keys. She sees someone going to while chilies at night. Mahek says who is that? Mahek goes after him. Its Arman. Mahek recalls its the same man. She says its the same man. What is he doing here?

Mahek sees Armaan and Nalini in white chilies from window and thinks what are they doing here? this Nalini is with this man? she is doing something fishy. Armaan says to Nalini that luck gets you chances and we have to avail it, there is no chance for mistake. Nalini says there wont be mistake this brother, all preparations are done and we have things need.

Mahek looks from window and thinks what they are talking? Nalini gives box to Armaan, Armaan says father Abba is coming in two days, I have to give information to him too. Mahek’s phone starts ringing. Mahek hides behind window outside restaurant. Armaan and Nalini hears someone’s phone ringing. Nalini comes out and looks around for any spy but doesnt see Mahek. she comes to Armaan and says there is no one outside. Armaan says I will talk to you later, Nalini takes rickshaw and leaves. Mahek is tensed.

Shaurya is locked in cage. One goon says to other that brother said to decorate that kid’s room very nicely for video call. Shaura thinks which kid they are talking about? Goons bring bed there. Shaurya sees singapore sign on it and thinks they are fooling someone to make this place look like Singapore. Goon brings Neev there on wheelchair but his face is hidden from Shaurya. Shaurya thinks what are they doing with this kid? Shaurya sees ball dropped by kid, he takes it and recalls how this ball was of Neev, he thinks oh God its Neev.

Nehal says to Mahek that I always thought Nalini is fishy but Shaurya protects her. Mahek says now I am sure Nalini has some motives and has connections with that man who has connection with that bomb blast. Sonal says this is scary, its about bomb blast, you should inform police.

Mahek says no, if I go without proof then even Shaurya wouldnt believe me and Nalini will get alert, first we have to find proofs against her, we have to find out what Nalini gave to that man. Mahek sees Shaurya calling her. Nehal says you should tell Shaurya about her. Mahek says no, Shaurya will get worried there in Singapore, we will investigate it here.

Mahek takes Shaurya’s video call, Shaurya/Armaan asks her how she is? she says I am fine. Shaurya shows her Neev lying on bed and nurse taking care of him in hospital background. Shaurya says doctor said Neev will be fine soon, I will be busy with Neev’s test for some tests and I wont be able to talk, Mahek is emotional and says its okay, she ends call.

Sonal says to Mahek that you should have told shaurya everything, I am leaving to set house with Mohit too, Mahek says dont worry, Nehal and Vicky are with me too, we will handle it here. Kanta comes there and says what to handle? Mahek says no I was just scolding Sonal to not take much tension.

Kanta says me and Jeevan are leaving with Sonal, Mansi and Ravi are going out of station for prayers, so Mehak and Nehal you should stay here for somedays with PD and Balwant, I have already talked to Karona. Mahek says dont worry, we will handle things here.

In morning, Mahek asks Sonal to leave without any worry. Mahek holds Sonal’s baby. Kanta tries to give her advice but Mahek says I know routine of this house, dont worry. Jeevan says we should leave, PD comes there and says I thought we should have family photo before leaving for memories, Jeevan says we have to catch train, PD says you want to get beaten in this age? all laugh.

PD ask them all to pose, Mahek takes selfie with all family members. Sonal touches PD’s feet and says I dont enjoy without you people. PD says we will come soon to see your new house, Mahek says yes we all will go. Jeevan, Kanta, Sonal, Ravi and Mansi leaves. Nehal says to Mahek that we should go to white chilies to shoo away witch Nalini. Mahek says to PD that we have to go, call us if you need, PD says dont worry, Nehal and Mahek leaves.

At terrorists den, Armaan says to goon that bring best food for Abba, he is angry on our failures, I will stay here for two days to answer him. Shaurya thinks that Armaan’s father is coming, what now they are planning?

Nehal and Mahek comes to white chilies. Mahek eyes Nalini. Vicky comes there and asks Nehal when did she come here? she says I need permission? he laughs, she says I came to help Mahek, he says its good, I will be able to watch you for whole day.

Nehal smiles and starts talking about menu with Mahek. Mahek keeps an eye on Nalini, Nalini notices her too. Nehal whispers that she is eyeing us too, seems like she is keeping an eye on us too, Mahek says we cant underestimate her, we have to be double alert. Mahek goes to try new recipes, Nalini looks on.

Armaan gets cleaning of den done and says Abba is coming, he asks goons to clean everything, serve Abba well. Shaurya thinks that he has been talking about Abba, who is Abba? Armaan leaves. Shaurya asks goon if their father is coming? Goon says talk with respect, he is an angel who gave us lives back, if you talk about him like then then I wouldnt spare you.

Nalini keeps staring at Mahek who is working in white chilies kitchen, she comes to Mahek and says if you need help Ma’am then you can tell me, sir is not here so you can tell me anything. Mahek says I dont need you, I will tell you when I need you.

Mahek mixes batter but it fall on her apron, Nalini tries to clean it, Mahek gets uncomfortable and says I will do it, relax, Nalini leaves. Mahek sees box which Nalini gave to Armaan last night, she thinks to ask Vicky about it but first.. Mahek asks Nalini and Nehal to go and check seating arrangement outside, Nalini nods, Mahek hints at Nehal to take Nalini.

Nehal says okay, lets go Nalini, they leave. Mahek asks Vicky whats in this box? Vicky brings out USB and says it has wedding layout given by minister’s PA. Mahek asks if there is copy of it? Vicky says yes in cabinet, Mahek says lets check that. Vicky takes out duplicate box from cabinet but there is no USB in it, vicky gets tensed and says it was in there, where did it go? I should ask people. Mahek says no dont ask anyone, I know what to do.