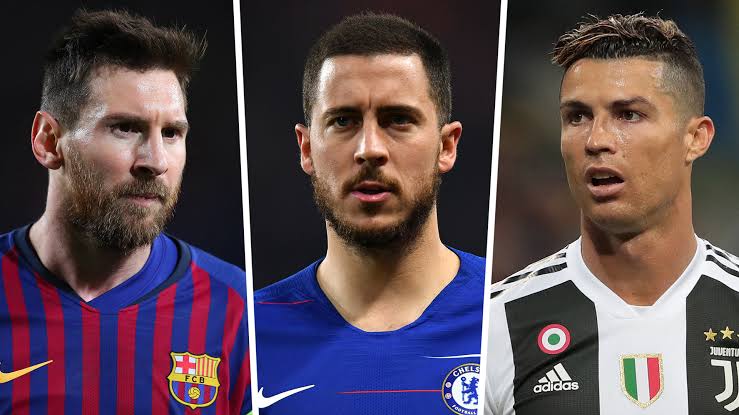 A very skilful and talented midfielder, Paul Pogba’s exploits at the 2018 FIFA World Cup was instrumental in his side’s victory in the most prestigious tournament in world football. Currently playing for Manchester United, his antics have not translated into success for his club who are currently struggling in the English Premier League. Pogba is worth $85 million USD and receives £290,000 weekly. He also had endorsement deals with sportswear manufacturing brand, Adidas. Pogba is known to have several luxury cars which include, Rolls Royce Wraith Black Badge, Chevrolet and Ferrari 812 Superfast.

Following his high profile move to Real Madrid from EPL side, Chelsea, worth €100,000,000, Eden Hazard signed a 5 year deal with Los Blancos to become the club’s highest-paid signing. The Belgian national football team captain receives £400,000 weekly. He has an endorsement deal with Nike, Topps and Electronics Arts. His net worth is valued at $100 million USD.

Andres Iniesta is Spain’s all-time most decorated footballer who has won a record 35 trophies including the World Cup and the UEFA Champions League and currently plays in Japan for Vissel Kobe, earns $576,923 every week. The former Barcelona skipper has a net worth valued at $120 million USD. He has endorsement deals with Japanese footwear brand, Asics. He also owns a winery named Minuto 116, after the minute he scored in the 2010 World Cup final.

2019 surely has been a tumultuous year for Real Madrid forward, Gareth Bale. The Wales international has had a strained relationship with Real Madrid head coach, Zinedine Zidane, who has shut the striker from his squad. Rumours have emerged that Bale is on the verge of a transfer to various clubs, majorly Chinese Super League clubs, which will make him the latest of many top footballers who have made the move to China. Bale who still plays for Los Blancos receives £350,000 weekly and is worth $125 million. He has various endorsement deals with Adidas, Nissan, Konami and Lucozade. He also has other businesses aside football such as his sports bar and restaurant based in Cardiff, called Elevens.

In 2018, Wayne Rooney joined the ranks of Premier League stars to cross the Atlantic to feature in one of the fast-rising football leagues in the world. After moving to American Major League Soccer (MLS) football league, Wayne became one of the highest-paid footballers. Currently at D.C. United and set to join Derby County at the beginning of next year, Rooney receives about £250,000. His net worth is valued at $160 million. He has endorsement deals with brands such as Samsung, Coca Cola, EA Sports and Nike.

Neymar Jr presented at Paris Saint-Germain after signing a record-breaking deal of €222m on a move from Spanish side, FC Barcelona.

Neymar Jr has had one of the most eventful years of his career in 2019. In the summer of 2019, Neymar was accused of rape by a Brazilian woman. The accusation shook the world by surprise, but fans were relieved when the case was dismissed as a result of lack of evidence. The Brazilian international also lost the national team captaincy after he was involved in an altercation with an opponent fan in last season’s Coupe de France final against Renee. Neymar receives €707,692 every week and is worth $185 million. He has endorsement deals with MasterCard, Gillette, Electronic Arts, Nike and McDonald’s.

A very controversial footballer, Zlatlan Ibrahimovic is one of the best footballers in Europe who has left a mark wherever he goes. The Swedish player who plays for LA Galaxy in the Major League Soccer earns $138,000 every week. He has a net worth of $190 million. He has endorsement deals with Nike, Nivea and also advertises Microsoft Xbox and Vitamin Well.

Argentine skipper, Lionel Messi is one of the greatest footballers in history, and probably the best in his time, the Barcelona man has won several trophies and individual laurels which has made him one of the most decorated footballers in the world. Messi receives as much as $646,000 every week. His huge collection of wealth has made him one of the richest soccer players with a $400 million net worth. He has signed endorsement deals with brands such as Adidas, Pepsi, MasterCard and Huawei.

CR7 as Cristiano Ronaldo is famously known is one of the best footballers in the world. The Portuguese forward has been in an intense rivalry with Argentinian skipper Lionel Messi for the best footballer in the modern age. Ronaldo who plays for Serie A side, Juventus receives $663,000 every week and has a net worth of $450 million. He has sponsorship deals with Nike, Electronic Arts, DAZN and Altice.

Not known to many, Faiq Bolkiah is the richest footballer in the world. The 20-year-old footballer who originates from oil-rich Brunei plays for Leicester City and is the captain of the Brunei national team. The Buena skipper is the son of the Prince of Brunei, Jefri Bolkiah. The sultan of the oil-rich state, Hassanal Bolkiah, who has a reputation for his extravagant spending is his uncle. Faiq Bolkiah is a member of Bolkiah dynasty estimated to worth about $20 billion USD. He earns about $1000 every week and he is sponsored by Nike according to his Instagram bio.