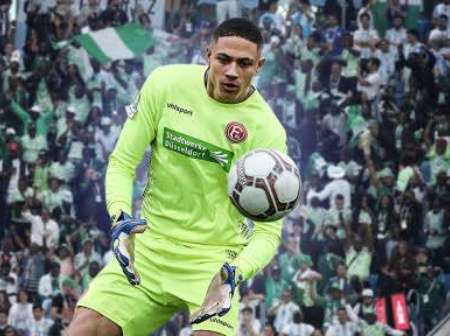 Maduka Okoye made a shocking revelation about snubbing Germany to play for Nigeria Super Eagles instead.

Maduka Okoye says his feeling “like a Naija Boy” was the motivating factor when choosing between representing either Germany or the Super Eagles of Nigeria in international football career.

Maduka, 20-year old, was born and raised in the city of Duesseldorf and was a relatively unknown name until coach Gernot Rohr included him in the Super Eagles squad that played Ukraine in September friendly match.

However, the shot-stopper was only given his chance when he came on for injured Francis Uzoho in the 1-1 friendly stalemate with Brazil a month later.

Okoye said “My advice is follow your heart,” when asked what to consider when pledging international allegiance via the Super Eagles youtube channel.

“You have to feel where the love is” he said further, “I felt the love in Nigeria and I feel like a Naija boy that’s why I chose Nigeria over Germany.”