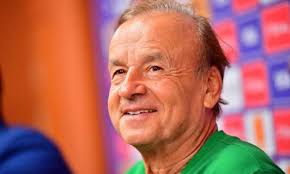 Super Eagles Manager, Gernot Rohr dropped a hint that he might modify and make changes to his starting XI against Algeria.

Nigeria take on the Desert Foxes on Sunday for a place in the 2019 Africa Cup of Nations final.

Rohr has so far fielded 20 of the 23 players he has taken to the tournament.

However, the likes of Henry Onyekuru, Victor Osimhen and third-choice goalkeeper, Francis Uzoho, are yet to taste action.

“We had two changes before South Africa and it’s possible we might change again.

“We have seven strikers and not everyone will play, but it’s a young team and some are here to learn.

“We’ve had 20 players play and I hope we can see two more. But tomorrow will be about the best team we have,” Rohr told a press conference on Saturday.

The game kicks off 8pm West African time in Cairo.