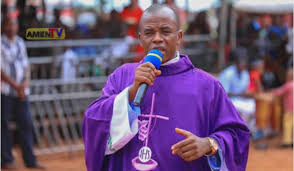 Father Ejike Mbaka had prophesied that Hope Uzodinma would take over the governorship seat from Emeka Ihedioha in 2020. Based on this prophecy and the recent development in Imo state, some easterners have accused the cleric of supporting the ruling party in Nigeria.

Read the cleric’s prophecy below:

He said, “I don’t know the manner the revelation will manifest but no prophecy has ever been declared on this prayer ground without coming to pass.

“He is coming with a new flag to restore the dignity of that noble land. New leadership will break barriers and there would be joy in the land of Imo. Lift your candles as I bless Hope Uzodinma and I empower him spiritually to take over. How, I do not know.”

On Tuesday, the 14th of January, the Supreme Court declared the election of Emeka Ihedioha as the governor of Imo state void.

According to reports made by Punch Newspaper, “A seven-man panel of the apex court led by the Chief Justice of Nigeria, Tanko Muhammad, unanimously declared Hope Uzodinma as the winner of the March 19 governorship election and the elected governor of Imo state.

“Justice kudirat Kekere-Ekun, ordered the withdrawal of the certificate of return from Ihedioha immediately. She also directed that Uzodinma must be immediately sworn in as the governor of Imo state.”

Following Uzodinma’s win, some easterners took to social media to express their opinion. Some of them said the court’s decision was unfair while others described Mbaka as a politician.

Mibilitem Udochukwu wrote, “As far as I am concerned, Fr Mbaka is a strong member of APC. He was used to declare the result so that people will see it as old news from God when Supreme Court declares it.” (sic)

_8_beth wrote, “And you people have forgotten what he said to Chimaraoke Nnamani but failed. There’s nothing like prophecy in this, I see Mbaka as a politician and you all know how dangerous they are.” (sic)

Franklin Nwaeze wrote, “AN Adeleke, Mbaka is a member of APC, they already told him to make that prophecy to test people’s reactions, he is one of them.” (sic)

Nnamdi Ogbonna wrote, “This is tiresome, I swear, APC and Buhari’s Govt is using Mbaka against Igbos. Everybody knows that this is the most bizarre judgement ever to be delivered by the Court. Yet many seem to accept it, as if it’s divinely inspired, not knowing it’s a pre-planned deal.” (sic)

Gerrard P Job wrote, “Is Mbaka the only man of God in Nigeria? Mbaka is nothing but a deceit in the present of God. So all of his prophecies end in Nigeria politics right? (sic)

Udenwa Davis wrote, “They already made the plan and gave Rev Father Mbaka the expo to tell people as prophecy.” (sic)

Eze Obi wrote, “An arranged agreement btw APC and Mbaka; so it will make people like you to believe it was God’s decision. I pity Africans and religion.”

Ezinne Okoro wrote, “Mbaka was used to spread it first so that it will look like it’s a prophecy but it’s actually a scam!” (sic)

Ofoma Ohagwu wrote, “If Mbaka is called of God let him tell us the fate of Igbo people in Nigeria. Let him tell us when an Igbo man will emerge president of Nigeria or when Biafra will be actualized. Mbaka is an APC member period in fact, he is a spokesman for APC in disguise.”

See a screenshot of other comments on Facebook below….