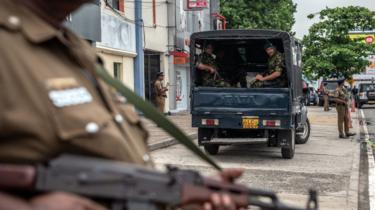 Sri Lankan police say they exchanged fire with an armed group in the east of the country as they searched for those linked to last Sunday’s bombings.

A military spokesman said there was also an explosion as police conducted a raid in the town of Ampara Sainthamaruthu, near Batticaloa.

In a separate raid nearby, police said explosives and uniforms of the Islamic State (IS) group were seized.

Earlier, Sri Lanka’s PM said warnings of the attacks had not been passed on.

Ranil Wickremesinghe told the BBC he had been “out of the loop” and that vital intelligence warnings had not been passed to him.

Sri Lanka has deployed nearly 10,000 security personnel across the country to track down all those responsible for the attacks and to provide security at religious sites.

Authorities have blamed a local Islamist extremist group, National Tawheed Jamath, for the attacks, although IS has also said it was behind them.

Security was stepped up around mosques for Friday prayers as some Muslims stayed away for fear of revenge attacks.

Related Topics:Sri Lanka bombing
Up Next

Buhari: Sharibu, Other Abducted Chibok Girls Still on My Mind