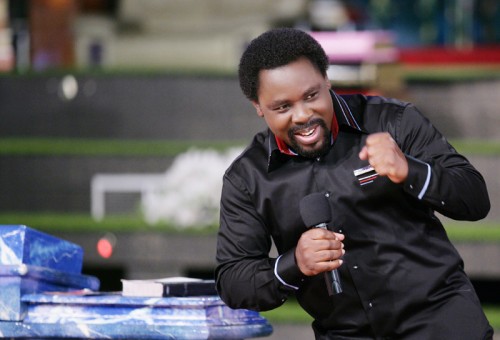 Prophet T.B Joshua, the founder of the Synagogue Church of All Nations (SCOAN), has reportedly resurrected Sergey Pak, who is believed to have been declared clinically dead by doctors.

A clip released by Prophet T.B. Joshua’s Emmanuel TV and sighted by Naija News, says Pak, who is from South Korea, had been ‘dead’ for 2 weeks before he was reportedly resurrected by the clergyman.

This online news platform understands that Pak, according to the clip, died after falling from a multistorey building while on duty.

“Pak had been in the coma for 2 weeks after falling for a multistorey rooftop while working. He suffered multiple fractures allover his body”.

“After the fall, he was rushed to the hospital where he was declared clinically dead for one hour,” explains Pak’s friend identified as Mrs. Elvira Wi from Korea.

According to the clip, Pak’s relatives disagreed with the medical verdict of death and decided to continue “proclaiming life while praying”.

Naija News learned that Pak was ‘miraculously’ resurrected after prayers but remained in a coma.

The clip released by Prophet T.B. Joshua’s owned Emmanuel TV, claims that doctors had declared that Pak would remain in a vegetative state “because his brain had been damaged for staying long without oxygen.”

Prophet T.B. Joshua’s owned Emmanuel TV claimed in the clip that doctors said: “Pak would be on life support machine for the rest of his life”.

It was learned that Elvira Wi, Pak’s friend, who shared the “testiomony”,  decided to seek spiritual interventions.

Wi, in the clip, said she traveled with the ‘dead’ Pak’s photographs to be prayed for by Prophet T.B. Joshua when he was in Nazareth, Isreal.

“In Nazareth, when I got into the prayer line with a photograph of Sergey, TB Joshua laid his hands on me.

“At that moment, Sergey’s father, Pastor Igor Pak who was also watching the live service on Emmanuel TV, felt a force touch his own head. The next day, Sergey regained consciousness” Wi narrated.

Prophet T.B. Joshua’s owned Emmanuel TV quoted Wi to have said that Sergey is “recovering remarkably” ever since being resurrected.

“By God’s grace, he can now speak and communicate freely with those around him”.

Pak, in his part, thanked everyone who prayed for him including Prophet T.B. Joshua interceding on his behalf.

“I want to thank all those who prayed for me. I also want to thank T.B. Joshua for praying for me in Nazareth” says Pak in the clip that has been viewed over 60 thousand times within 24 hours.

Speaking further, Pak’s friend, noted that Pak’s “resurrection” and “miraculously recovery” has shocked all the medical doctors who treated and declared his friend as clinically dead following the near-fatal accident.

Watch the video below…

how did you fine this video